Be sure to check out Reeds  and / or the appropriate pilots for more detailed information and alternates, this is just an overview of likely candidates, but I have been to all of them. I am generally only concerning myself with anchorages as harbours and marinas are well covered in Reeds.

To see  my recent visits to each anchorage check out the "Labels" towards the bottom of the right hand panel.

If the tides work to get round Lands End from Newlyn to be at Cape Cornwall at a sensible time and with an east bound tide (as there should be) then St Ives is an excellent setting off point for SE Ireland or South Wales BUT only in settled conditions, it is very exposed to onshore winds and Atlantic swell and waves can refract round the headland to make the anchorage untenable, remember Newquay further up the coast is a surfing mecca for that very reason.

In 2022 (and probably in 2020) there was a large number of lobster pots north of the harbour with strings running east / west, each with a pick up buoy and a Dan buoy several meters down tide of it. On a dark night going North / South there is a good chance of fouling one as I did in 2022. If you really have to leave or arrive at night don't head head for / from the harbour go via "Clodgy  Point" west of the harbour (or a bit further west) and keep close to the shore between there and the harbour keeping a very sharp look out using a good lamp, at least you will pass inshore of most of them.
Visited 2020 & 2022.

If going up the west coast of Wales then Milford is an obvious stop off point and it works well to or from Ireland depending on the wind and it has an anchorage to suit most winds. The most convenient are  Dale Shelf with winds with west in them, Sandy Haven Bay for north westerlies to easterlies and West Angle Bay for easterlies and Angle Bay for southerlies. If the wind changes you will probably have to move as the water can get quite uncomfortable, although not dangerous very quickly. There are a number of good anchorages above Cleddau bridge but its quite a long way. 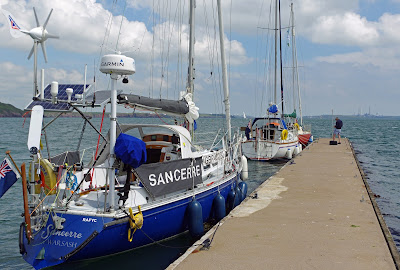 Alongside the pontoon moored in Dale Shelf Bay. I would not recommended lying to this overnight, I had spent a quite night at anchor close by and motored over to meet up with some fellow Jester sailors (the boat in front of Sancerre from the RAFYC of which I am a member and the one in from of that an Achilles 840. An hour or so after arrival the sea got up and we left, two of  us to Sandy Haven Bay.
Visited 2021 and 2022.
Sandy Haven Bay
No facilities but good holding and shelter from the north and east.
Visited 2021 and 2022.

Holding suspect and very exposed to gusts from the SE, I got blown out of here big time in 2022 (opens in new window). fair weather only but there are better places in all wind directions.
Visited 2022

The East Coast of Ireland

Coming from Lands End, the Isles of Scilly, St Ives or Milford Haven,  Carnsore Point is often a good landfall and will usually allow you to avoid the Off Tuskar Rock TSS and the rock itself and in offshore winds it is then an easy sail up the coast inside of the often dangerous offshore banks. The first suitable anchorage is St Margaret's Bay with Ballytrent Bay just beyond.  No pictures I'm afraid because when I first went that way it was a bit damp and the second time it was overcast. Good shelter in off shore winds, I have been there in in NW and SSE winds, the later quite strong, and had no problems.
Visited 2020 and 2022.

Again no pictures but a reasonable passage anchorage in an offshore wind.
Visited 2020.

Anchor outside and west of the harbour. Offshore winds or calm conditions only. It was OK in a F5 southerly. The harbour is a possibility but the pilot is not complementary to the managements attitude towards yachts.
Visited 2022.

Just south of Dublin Bay, it is a good anchorage when the wind has west in it and in 2021 I spent a good night there in a strong northerly. You need to be quite close in for shelter and out of the deeper water.
Visited 2020, 2021 and 2022.

Good shelter from the southerly and offshore winds, lots of moorings but (in April at least) plenty of room between. Quite shallow further in.
Visited 2022.

Dundalk bay is large and shallow and there is not a lot of shelter from a strong offshore wind which gave me a few uncomfortable hours on my first visit in 2020 but it does avoid going into Carlingford Loch, that might be a good visit but getting out against the tide could be a problem - best to read my post Dublin – Dundalk Bay – Ardglass. My visits in 2021 & 22 when I anchored in different spots in different conditions went smoothly.
Visited 2020, 2021 and 2022

A useful stop off point if the wind is too light or contrary to get between Ardglass and Brown's bay in a single day and there is a marina near by if the wind is onshore and kicking up a sea.

A good spot for the passage across the North Channel to or from Islay, Gigha or Campbelltown, the usual first or last ports of call when cruising through the Scottish Islands. It is exposed to the North and can suffer from surge but if it is too bad you can always go into Larne. 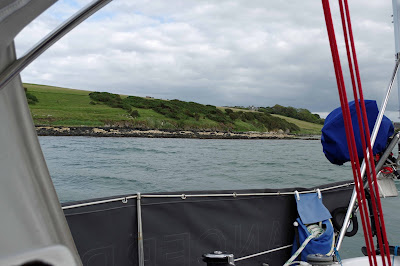