Jester Baltimore Challenge 2019 – Getting to Baltimore.

Sunday dawned blustery but it appeared to be acceptable so many of us went to the start, and it was certainly rather windy, the photos here were taking inside the Plymouth breakwater and, after 3 days of strong winds, it rapidly got uncomfortable outside with the tide running against the wind.
The committee boat was meant to be anchored to identify the western end of the mile long start line extending from the western end of the breakwater, with the weather however they motored in circles so it was a question of chase the committee boat. After the start (2 minute early according to my GPS!) a number of boats went straight into Cawsand bay to anchor and wait for better winds, I carried on, not wanting to get caught in possible light winds coming. 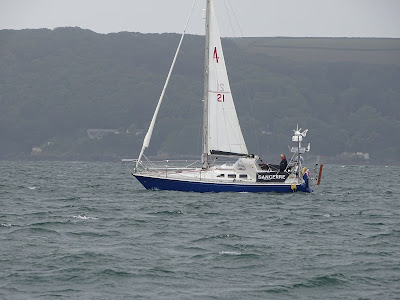 With a west going tide, the plan was to make a 4 mile starboard tack to the south to get clear of the shore but staying north of the Eddystone and related shallows which could kick up even bigger seas, then to make as long a port tack as possible until close into shore.

The sailing was very uncomfortable and tiring with winds between 18 and 23 Knts true with gusts rather more. I only saw wind below c 17 Knts when well past the Lizard except for a few occasions in the lee of the Lizard peninsula.


I struggled on the first leg to get the best out of the boat with the new headsail and wind vane self-steering and I lost quite a lot of ground to Mike in the triple keeled Achillies 9M “Tranquility”. Having such a similar boat to compare with was a big opportunity to learn and once I got the hang of it and started driving the boat hard I started to catch up, but it took me to the Lizard to do so.
I cleared the Dodman by c 3 miles and St Anthony Head by half a mile before being forced to tack by a tanker going into Falmouth, otherwise I would have stood on a little bit more to get calmer water and tacked when necessary to clear the Manacles.


I passed the Lizard at about 02:00 in close company with Tranquillity (Achilles 9M), Guppy Unchained (Django 770), Flamingo Lady (Westerly ?) and Drifter of Mochras (Moody 31), we were to stay together for much of the next day and a half.


It had been 15 hours of hard sailing which was not to stop for several more hours, with the wind decreasing to c 15Knts at 04:50, 13Knts from south of Wolf Rock (07:30) until Pol bank / Bishop Rock (12:10) when the sailing was excellent in warm sunshine and with lots of dolphins to watch.  The wind got up a bit crossing the West of Scillies Traffic Separation System (TSS) (14:40) but with the course more off the wind this was a lot more comfortable.
The trouble started gradually with the wind dropping progressively during the night to the point that at one time in the early morning there were 3 boats quite close together but pointing in completely different directions due to lack of wind, at one point I made only 3.6 NM through the water and 1.4 NM over the ground in 5 hours, 20 minutes.
When a decent wind set in it was dead on the nose, I gambled on a long starboard tack to get most advantage from the backing wind suggested by the forecast, a long port tack would probably have put me down wind and possibly down tide of the Fastnet and the "safe" option of tacking every hour or so either side of the direct line to the Fastnet did not appeal.
The wind gradually increased until I was thrashing along just able to carry full sail, the wind started to back earlier than expected at c 07:30 so I tacked and ended up sailing the initial part of the final leg into the Fastnet a little off the wind which was now about 15 Knts, then the tide changed along with a slight change in the wind and I was back to being close-hauled.

I passed the Fastnet at about 14:30, from there it was a dead run past Cape Clear and Sherkin Islands, The wind was marginal for the symmetrical spinnaker but OK for the cruising chute on the pole, but I was tired so settled for the 150% genoa goose winged from the pole which was almost as fast although Don in "Guppy Unchained" who had followed me into the rock, caught up a little.
I crossed the finish line at 17:23 on Wednesday after sailing for 76 hours 23 minutes, the first in from the Plymouth start.  Duncan with the Achilles 9M “Freebird” had arrived a couple of hours earlier, first of those starting from Pwllheli to arrive.

Mike in Tranquillity (Achilles 9m) arrived about 22:30 after a long beat against the tide up to the Fastnet inside the TSS – we had passed each other going in opposite directions a few miles NE of the rock. All three of us, representing 3% of the entire Achilles 9m fleet, had completed the challenge in good time.

We chose to anchor for the first couple of days at the west end of the harbour, a long dinghy ride from the village but sheltered from the strong wind.

Slide show all of my pictures from Plymouth to Baltimore. Page through by clicking the arrows or click in the centre of the pic to view from Flickr in a new window or full screen: 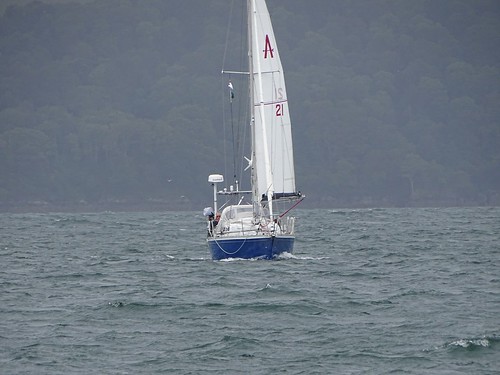