Again the wind forecast was a big issue, strong on Sunday with very strong winds forecast mid week so there was not enough time to safely head direct for Gosport and time at anchor in the Isles of Scilly could be a bit bouncy. Also winds were forecast to be very light on Monday and Tuesday and probably easterly.

I did not want to be stuck in Ireland for a week and then perhaps find the wind still to be a problem so, having plenty of fuel, I left at 04:30 on Monday and suffered noisy motoring most of the way to Fowey arriving at 22:00 on Tuesday.

Lots of Dolphins on the way back:
Dolphins in the Celtic Sea (it starts a bit slow but quickly gets better)
unfortunately the high resolution original was too big for Blogger
but this is reasonable full screen on a medium laptop or iPad.
The promised stiff easterly winds came in on Wednesday morning peaking with very strong winds (F8 & F9s being reported) on Thursday and Friday so it was 3 days sitting out the weather on a mooring in Fowey, with some boat maintenance and these blog postings passing the time.

I left Fowey early on Saturday with a decent wind... which lasted less than an hour and I was motoring again well into Lyme Bay, a F4 then came in from the west and I sailed into the Solent, the sea got nasty surprisingly quickly even allowing for the wind being against the tide so it was another tiring trip. I arrived at Gosport about 10:30 having sailed (and motored 😒 ) 835 nautical miles.
Slide show of all my pictures of the trip home, page through by clicking the arrows or click in the centre of the pic to view from Flickr in a new window or full screen: 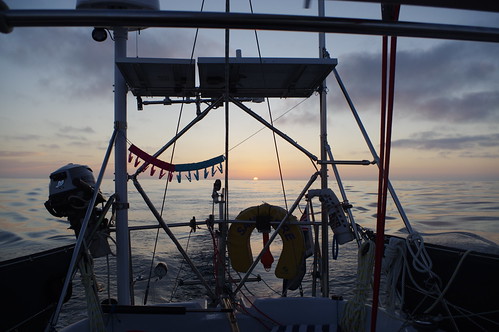