Some years ago, I'm not sure when but the non-DSC radio and an early GPS gives a hint, a previous owner put in an electrical panel. Unfortunately it was installed approximately parallel to the hull which meant that the chart table no longer fitted except horizontally and forward of its intended position where it was essentially unusable and difficult to remove for access to the quarter berth. Much of the non-load bearing bulkhead over the berth was also removed, presumably to make access to the berth with the chart table removed easier.

Immediately after purchase I had a plotter, VHF and autopilot head installed topside (pic below, I had these pieces installed professionally as I was busy on other things and wanted to go sailing) and I started a rebuild of the navigators area and the electrics which on and off took a couple of years.

With the radio etc. out of the way the panel only had to cope with electrics. The first iteration supported the existing single domestic bank of batteries (250 AHr) and a new single solar panel mounted on the push pit. The panel was installed along the line of the original fittings, the bulkhead rebuilt - not easy as the bulkhead had been cut out irregularly and the refurbished chart table was reinstated.

The existing Sterling 4 step alternator regulator was moved to the bulkhead along with a new gas detector and car radio. The new anchor windlass CB, some USB and 12V power outlets were added to the panel.

Over the next year I added more solar panels to end up with 115W on a new gantry and 35W on the cabin roof, a wind generator, a second 200 AHr domestic battery bank with automatic charge management by Digital Voltage Sensitive Relays, NASA battery monitors for the domestic banks and an IridiumGo satellite system. A new hybrid solar and wind controller had to be installed which now independently feeds the domestic banks and the starter battery.

Early in 2019 I added removable rain screens, teak grab handles to help me get out of the seat, SSB receiver and, somewhat belatedly, a consumer unit with duel pole RCCB and MCB breakers for the shore power which the previous owner had omitted when the shore power and mains battery charger had been installed.

The iPad mount has been changed for an articulated RAM "ball" system with additional mounting points at either end of the instrument binnacle top side and adjacent to the bunk I use at sea, so with the Garmin Helm App (which replicates essentially everything the plotter can do) I can keep a Radar and AIS watch from my bunk or the from the Nav's seat.
In late 2019 I tided up the panelling outboard of the chart table giving additional support to the chart table and to the electrical panel, panelled over the exposed bolts under the deck and fitted additional storage for small items and the binoculars. 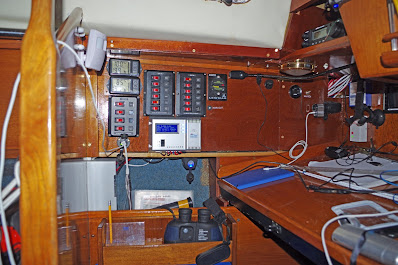 I have two iPads (the refurbished one from a dealer was excellent value) both have internal GPS although only one has a 4G SIM card.  When logged onto the NMEA gateway they can also get GPS, AIS and other info from the network. One is normally topside under the spray hood, which except in bright sun is easier to read than the smaller plotter mounted lower down.

On deck when costal sailing I can have the iPad displaying the Imray chart & AIS and have the plotter (or the 2nd iPad) showing just radar (and optionally AIS) which, especially at night, makes it easier to spot radar targets than when using overlay mode.

Both iPads have a range of software but only requires one licence:
All of the above are also loaded on my iPhone but, apart from the IridiumGo and tides planner, are only there for emergency backup, "because I can" at no cost.
See also the reconfigured battery compartment and power distribution panel here.
Posted by John Lashbrook at 3:14 PM No comments: