Light and variable winds were forecast for several days and that proved to be the case, I left Tinker’s Hole just after 7, in theory the tide would be against but probably only for a couple of hours then it would be fair through to the Sound of Mull. As it turned out there was little or no adverse tide through the Steamer Chanel or through the sound which was not that surprising as the sailing directions warned that the timing of tides through the sound are somewhat unpredictable.

The Steamer Channel is at its narrowest as it joins the Sound and where is a nasty rock, just awash to avoid as you turn into it, but once in the sound it is straight forward for much of its length given a good rise in tide and at Neaps, the tricky bit was easier this year as I just followed last years track still in the chart plotter although with more water it wasn’t strictly necessary to be as precise. 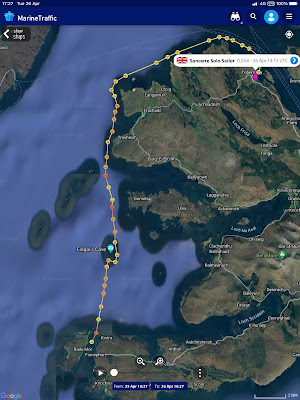 Having motored for an hour I was sailing as I left the sound reaching in the south easterly wind but not soon after the wind backed and I had to put in a tack to clear Staffa, with the sun in the east Fingal’s Cave did not show up as well as last year. Once past the wind dropped before reappearing from the west for a time before veering so that I struggled to get round the headland whilst still carrying the cruising chute. As I turned into the Sound of Mull the wind disappeared completely and with no sign of it returning the last few miles were again under engine. I made a mistake picking up the closest buoy to the marina only to find that this early in the year I was shaded by the cliffs and woodland very early.

The plan was to re-victual, top up fuel and Gas and to get some washing done, the last did not happen as the washing machines were being replaced.

The forecast showed strong winds coming in at the weekend but the timing of its arrival varied from late Friday through Saturday. I did not want to stay in Tobermory long enough for this to pass so decided to move on to Canna, the most westerly of “The Small Islands” which has an anchorage with good all round protection that would be needed as the small but intense depression would likely go close overhead so the very strong south or south westerly could tun into a strong wind with north in it.

If I left very early Canna could be reached in a day but I decided to do the shopping on Wednesday morning, leave as soon as it was done and stop off somewhere on route, which turned out to be Sanna Bay.

33 miles over the ground in eight and a half hours with the help of 3 hours under engine and a good bit of tide. 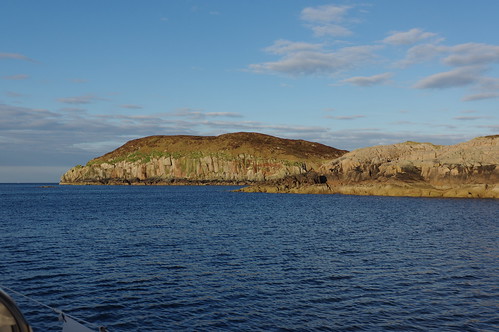 Click here for Sanna Bay and Canna.
Posted by John Lashbrook at 3:59 PM