I left with a fair wind and was sailing before I got out of the harbour then shortly after had the cruising chute up and almost before I had got back to the cockpit the wind dropped to next to nothing and from the opposite direction so I had to gybe then drop the cruising chute as the wind backed and I was beating out towards Ardnamurchan Point. With the slow going and variable wind I went to Sanna Bay just past the point, which unlike most of the anchorages in the closer Small Islands has reasonable protection from the most likely wind directions. 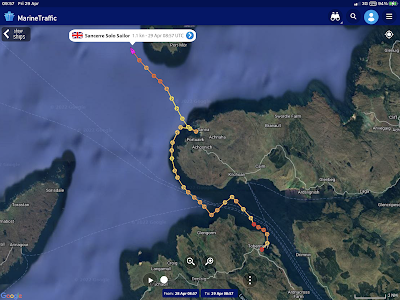 Finding your way in there is stress free with the Antares charts and GPS but would be less so without as there is an extensive underwater reef extending a long way across the bay.

A very nice anchorage with small sandy beaches but I was not tempted to go for a swim! 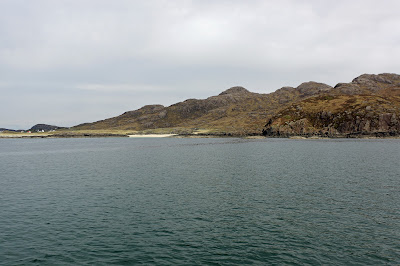 15 miles over the ground, more than the optimal track due to the need to beat, in 5 hours with only 40 minutes on the engine getting off of the buoy and entering the anchorage.

There was even less wind on this leg and despite using the engine for a while south of the island of Rum and from Rum to Canna and into the anchorage it took me just under 7 hours to cover the 15 miles, even with a generally favourable tide. But the sun was out and with little wind it was pleasantly warm, almost hot on occasion.

The Sailing Directions, the Antares chart (I suspect the main source of the information) and the Islands web site warned of extensive weed in the anchorage and the need to ensure the anchor was well dug in. With winds forecast to be F5 – 7 becoming cyclonic, just the thing to unscrew your anchor or for an anchor lodged in strong kelp to come free I decided not to risk it and picked up one of the moorings, surprisingly they were 50% more expensive than mentioned in sources and only £2 less than Tobermory with all of its facilities.I had looked forward to a meal ashore at the tiny restaurant which is strongly recommended but as they had had no bookings by mid afternoon had decided not to open, naturally I turned up then two other boats and at least 3 people on one of those wanted to eat.

The lady said they would definitely be open on Saturday but as I write on Saturday afternoon it is raining and blowing F5-6 and was blowing F7 (30 knots) when I last checked an hour or so ago, so it is unlikely I’ll be going ashore, the inflatable dinghy is in the water but rowing is out of the question and getting the outboard on problematic with the boats motion and not worth the effort.

If the models are correct (there is no cell phone service on O2 or Vodafone and the public wi-fi from the ferry terminal drops after a couple of minutes then locks you out for an extended period so I don’t have the official inshore water forecast, just what I can download via satellite twice a day which does at least include the shipping forecast) I may be able to leave tomorrow in light-ish winds but the sea can be disproportionately rough in the Sea of the Hebrides, so I will want the wind to drop quickly this evening.

The models are not consistent but more strong-ish winds are likely at the end of the week and brisk winds on occasion mid week from various directions so if I leave I will hedge my bets and head for LochBoisdale on South Uist 30 miles away which has good all round protection from the wind and I can decide on my next move from there when hopefully the models will be more in agreement.

If the seas are too rough I should find out within an hour and might return here for another night rather than suffer discomfort for much of the day – I was rather surprised when a 34 foot sailing boat left this morning, with 3 crew in a well found boat they should be safe enough, but it will likely be very uncomfortable out there even if heading northerly or up the Sound of Sleat. They later turned up at LochBoisdale and confirmed they had been very uncomfortable. 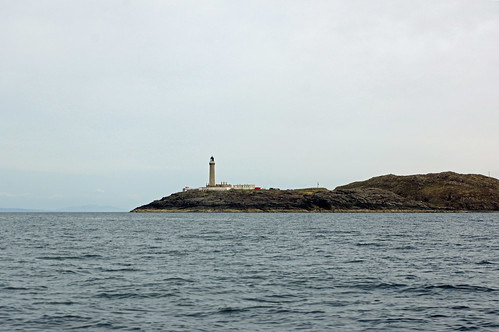 Posted by John Lashbrook at 4:16 PM