I was asked for details of how I rigged mine by someone who had a brief look, so as I was going to write it up I thought I might as well make it a blog post whilst storm bound at Plockton (to be covered in the next post).

Some "stack-packs" and "Lazyjack" kits I have seen have all of the bits you need except for an easy way to drop the lines to stow along the boom which in my view you need to be able to do easily, there are at least two reasons to want to be able to do this and re-rig them quickly.

First, if they are left rigged the leeward ones will rub against the mainsail potentially damaging the stitching or cloth and leaving dirty marks, modern soft platted line has reduced the risk but does not completely eliminated it and it can become an issue over time especially if the sail gets a lot of use.

The second issue is the main reason I drop mine, that is raising the mainsail when not pointing directly into wind or close to it when there is a tendency, especially if the sail is not fully battened, for the battens to get caught up in the "Lazyjack" lines. If you can drop the leeward "Lazyjack" you can raise the sail on a broad reach and even on a run if the boat does not have extravagantly swept back spreaders.

This is very useful if it is not convenient to luff when hoisting and when raising the mainsail at sea, after riding under storm jib or far more often after broad reaching or running under just the jib. On an A9m the 15 sq m stops the 30 sq m Genoa from drawing on a very broad reach or run so if for whatever reason you don't want to set the spinnaker, or boom out the headsail on a run, using the headsail alone works well over a wide wind range, on my current cruise (2022) I sailed much of the way along the S English coast, the eastern Irish coast and 65 miles from S Uist back to the mainland like this in strong winds and made good time, from S. Uist that I did yesterday I averaged 5 knots over the ground in conditions varying from F2 - F6, mainly F5. 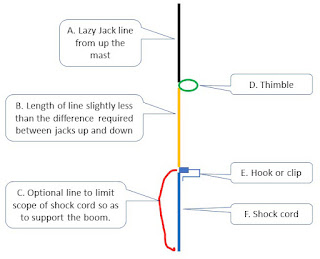 Here is how I have done it. When stowed you need a fixing at or near the gooseneck,  I use the redundant slab reefing horns, active horns could be used but you would have to raise the "Lazyjacks" before putting a reef in, something that would normally be done to hold the bunt of the sail but another thing to do if you have to reef in a hurry. Without reefing horns a hook or carabiner would be needed on each side of the boom, that would probably have to be big enough to hold all (3?) lines.

Referring to the diagram.

A. Is the line coming down the mast as you would already have if the line is not terminated high up to save the addition pair of lines outside the mast, if they are so terminated, a block will be required on the mast and a new line.

D. Attached at this point is a thimble, a loop in the line would work but would probably get chaffed quite quickly.

B. Is another length of line which is a little less than the amount of line required to extend the "Lazyjacks" to the stowed position, a dummy fit will be needed to establish this.

E. Is some form of hook or carabiner that will hook on the thimble (D) to shorten the line.

F. Is some strong shock cord (I use two thick pieces in parallel) to keep tension on the lines in either position.

C. Is an optional piece of line to limit the extension of the shock cord, this may be required if the Vang is not ridged, so that the boom will not drop to the deck if the topping lift is let off.

To stow the "Lazyjack" unclip "E" from "D" pull the (3) "lazyjack" lines down and put them under the reefing horns or into the hook / clip. The shock cord will hold them there.

Posted by John Lashbrook at 4:57 PM