The trip over to Loch Boisdale was not eventful and largely under engine due to lack of wind, there are limited pictures as there was little to see. 29 miles in four and a half hours.

The weather was looking very iffy so there was no rush to move on so I stayed over to get the washing done (the laundry at Tobermory was closed awaiting new machines) and to have a good fish and chip lunch in the local hotel with Bill Fraser, another single-hander who came in with his old one tonner "Ceil III" on route to pick up some crew.

I left about 09:30 (with no hang over) towards the north, having to wait outside of the marina for the daily ferry to depart down the narrow channel, intending to go to Loch Maddy via Skipport but already considering bugging out to the mainland for a few days as I had been warned of  limited shopping in Loch Maddy and weather forecasts indicating poor weather ahead for a considerable period. 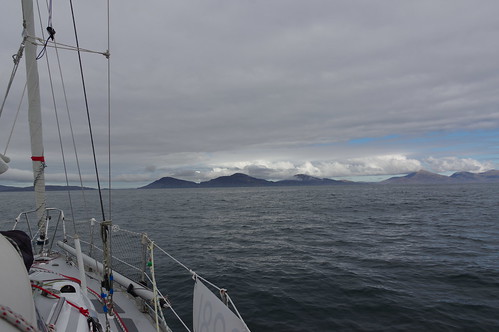 16 miles in five and a half hours.
Click here for the dash to the mainland.
Posted by John Lashbrook at 2:35 PM