Weather doom and gloom, and not just for me.

Well, after bugging out of S Uist last week I have been hiding behind Skye for 8 days, I have had a couple of very nice days with no wind, a couple wet with iffy winds when I went shopping by boat (shopping in Plockton is almost non-existent) and four days of strong winds and rain, on two of those days I have seen more than 45 knots and I only have the anemometer on occasionally and not overnight. Today it is still blowing old boots (F5-7 forecast) and I just measured a 30 knot (F7 almost F8) gust.

The guys doing the OSTAR (single handed to the USA) are having a hard time of it and one competitor who I know, appears to have retired and is heading this way in his "Open 40" racer and I am standing by to meet him to help out if necessary.

Update: shortly after the report of him heading for Scotland his tracker failed, he was next seen off Ireland and the lifeboat went out to pick him up, which surprised him as he was quietly making his way to safety with no electrics, engine or self-steering and the first he knew of the rescue effort was an Irish Coastguard helicopter hovering overhead, he did not know that the sealed, battery powered tracker had failed so did not know an alert was out. With the lifeboat on hand, he naturally accepted the tow 30 or 40 miles to Ireland where he remained for weeks repairing the storm damage. Watch a video of Neil's account of what happened (opens in a new window)

The weather should improve over the weekend, hopefully this afternoon so I can eat ashore this evening, but strong winds and rain will be here again next week, although the models disagree on when. 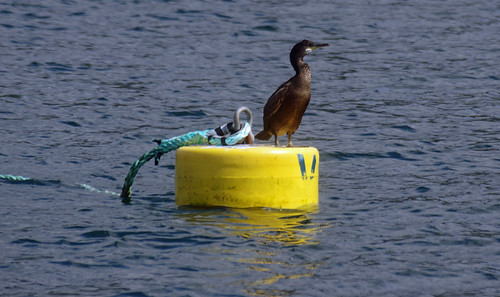 Some pictures from the mooring 9th & 10th May, not the worst weather
as I was not inclined to go out in the rain!

I have been checking out multiple forecasts from operational models and some from "ensemble" medium range models, all show poor weather and some strong winds through next week but I saw a possible improvement from the 20th or 21st but the models available to me are not good at that range so I just spoke to a forecaster at weatherweb.net who do a lot of work on medium range forecasts.

They confirm that there should be better weather from around the 21st but that might not be long enough to let me get to St Kilda (the sea will need several days to calm down), it could also get messed up in the north if the expected high pressure that should give good weather in the south, does not get far enough north, a distinct possibility especially 50 miles west of the Outer Hebrides. Worse the analogue models (these compare current and recent weather with previous years to see what happened then) and others are suggesting weather in June and possibly July is likely to be very changeable and generally not good.

The conclusion is that I will sit it out for another week hopefully with some day sailing and review towards the end of next week, in any case dodging the weather I could probably only get as far as Tobermory in a week if I gave up now.  If a good enough window does not show to be opening I'll use the somewhat better weather to head for home as and when the weather permits, otherwise I'll not be home early enough to go for an autumn  cruise. For the same reason, if I get to St Kilda I will almost certainly head south rather than try for Shetland.

On Monday the 16th I went to Kyle of Lochalsh on a shopping trip, with my arthritic feet it was rather a long walk to the station in the dry, then the rain started a minute of so before the train arrived and was steady until just before I got back. By walking quickly to and from the large coop I was able to catch the same train as I had arrived on as it started its return trip avoiding a long wait and getting me back to Plockton in time for a second, less extravagant meal at the Plockton Inn.