The weather forecast looked no better, the GFS model was a little better but the UKMO, ECMWF and others were moving closer to the GFS, also the GFS & ECMWF looking 10 days out showed no windows for St Kilda and gales, perhaps severe gales, early next week and I would want to be somewhere very secure for that.

The main options were Stornoway or the mainland, I opted for the mainland as it might allow some local sailing in the shelter of Skye and it is closer to the Sound of Harris, one of the two ways through the Outer Hebrides, for an attempt on St Kilda.

Getting there could take a day or two, the problem was the tide, there are strong currents around the Northern tip of Skye that leads to over-falls there and for several miles down the east coast when the wind is against tide. The tide was due to turn at there at about 12:00, that would mean a very early start, but with no moon starting before twilight would make getting out of the anchorage totally dependant on GPS and even with two independent sources (the plotter and an iPad with Antares charts - my PC which is a third independent service is in the cabin so not practical for getting out of an anchorage with the exit only a few boat lengths wide).

The Almanac showed for the area:

So I decide to leave at 04:00, it would still be quite dark but even with a likely overcast I should be able to see the land. That start time meant that I needed to make 4.5 knots through the water all of the way past Skye and accept 30 - 60 minutes of adverse tide down the east coast. If I could not do that without using the engine I would divert into one of the lochs on the west or northern Skye coast, either to stay the night or  more likely, to wait for the start of the next favourable tide starting around 18:30 then anchor just around the corner at Staffin Bay which should be well sheltered from a south westerly.

At about 03:40 I could clearly see the land around the anchorage and the exit, but as I weighed anchor at 03:50 it started to rain, wiping my specs frequently I could just make out the headlands as I went out, but only just.

Once clear of the loch the wind was blowing F3 from the port quarter, with the promise of more to come (the forecast was F3 - F5 with some models from the previous evening showing a tad more in the gusts) so not for the first time I did not bother with the mainsail sailing under just the Genoa. The north going tide kicked in after a couple of hours and I made excellent time to Skye due to the F5 wind I had most of the way with only brief spells above and below. The downside was frequent showers and some longer periods of rain that got me very wet.

A rant post on leaking waterproofs may well follow here or on Facebook, especially regarding the trousers which were new for this trip and not cheap.

Update Sept: When in Newlyn later in the trip I got some French made trousers as used by commercial fisherman, they were cheaper than "yachty" ones and although it is easier to sweat up in them and movement is not as easy I have yet to get wet from sitting on a wet seat! And they are tough, repairable, easy to get on and have a working fly.

I made the tidal gate with about an hour to spare under sail alone but used the engine for almost an hour rounding the top of Skye as I was on a dead run with a very fluky wind and in a confused, but not particularly rough sea. 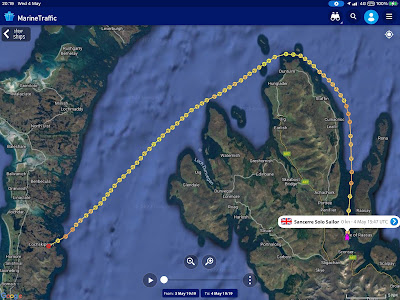 The trip down the Sound of Rassay was routine but, like the trip across the Little Minch I was forever reefing and un-reefing the headsail. The wind gave out just north of Portree so on went the engine for the last three or four miles to the narrows.
Plockton was too far to contemplate and in any case, I would arrive after dark which would make finding a visitor's mooring and avoiding others tricky. With strong SW winds forecast overnight I decided against Portree which can be exposed in those winds so motored on to the Rassay Narrows. Last year I had anchored off Churchton Bay on the east (Rassay) side but that would be untenable with the SW wind so I went to a good anchorage on the off of Braes Beach on Skye and had a good nights sleep, not that difficult after a hard days sailing and a fitful short sleep the previous night.
65 miles in 13 hours.
The trip to Plockton followed the same pattern as last year, again under headsail only but with more wind and rain getting me wet again.
I arrived at 12:00 and by mid-afternoon the wind had moderated enough to row ashore for some shopping (I did not want to make the effort of putting the outboard on the dinghy then having to put it on board again if I was to sail next day or if the wind increased).  The very small shop there, attached to a cafe, has a very limited stock but I did get some critical stores, mainly wine and fruit. I again got caught in a shower without my wet waterproofs and decided to stay on board for the evening rather than go ashore and get wet a third time in one day. The heater is working overtime drying me and my cloths out.
18 miles in 4 hours. 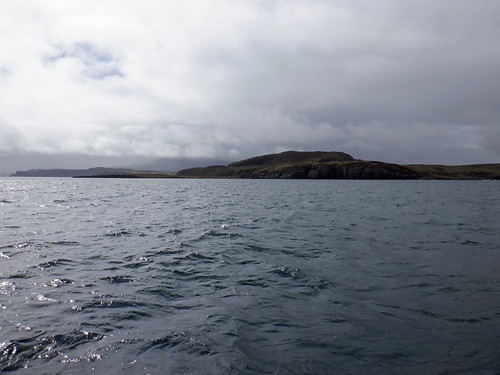 Click here for my time at and around Plockton.
Posted by John Lashbrook at 5:08 PM