I had intended to start a short summer cruise later in July but with a heat wave forecast I decided that I would be better off on the boat than sweltering at home so, on the 15th July I decided to leave for the boat next day. I had that morning got home from replacing the anchor chain drastically shortened after fouling it at Lindisfarne and sorting the few issues from my round GB trip so the boat was ready. There was then a mad rush to get together food, diesel and other items for a 2 - 3 week trip with the possibility of not going ashore because of crowded harbours etc.. The next day I had a very full car and a hard days labour loading the boat on a hot day but it was done at last and I had a relatively early night as it would be an 04:00 start on the 17th.

I actually started much earlier as I woke at 02:15 with a nice 9 knot wind from the north so I left at 02:45 to take advantage of that and a full tide once out of the river which would give me a good chance of getting to Portland rather then Studland. It was a clear night but very dark as there was no moon so care was needed going down the Hamble where shore lights confuse things and unlit boats on moorings are not easy to see.

Once into Southampton water I found it very busy with commercial shipping including a very large cruise ship coming from the west, the largest ship I have seen using the Needles channel, with so much going on I had to motor until 04:00 with  a quick dash to the western shore at Fawley then staying close in and out of the channel until past Calshot.  With dawn breaking it was then a pleasant sail for a hour and a half until the wind died and on went the motor again.

Lots of boats had left the previous evening against the foul tide, I suspect I passed many of them as I went down the Solent as there were boats anchored all over the place with traditional anchorages filled and overflowing.

I reached the "Bridge" buoy at 06:10 and 20 minutes later there was enough wind to sail with the large (60 sq. m) spinnaker that I was able to carry until past St Albans Head.
With fluky winds it was touch and go if I would get round St Alban's without gybing and standing out to sea, in the end I gybed the mainsail but left the spinnaker as it was for 10 minutes and I scraped by.
The wind was still variable and suddenly the 5 knot wind veered and increased to 15 knots just as I was passing between two sports fishing boats and it was panic stations for a while until I had the spinnaker down. Shortly after the wind disappeared completely and after waiting for a good while for it to return I motored on to Portland anchoring in the harbour at 16:15.
A warm day with fluky winds but an excellent sail from the Needles to past St Alban's Head.
Slide show of all my pictures from Hamble to Portland, page through by clicking the arrows or click in the centre of the pic to view from Flickr in a new window or full screen: 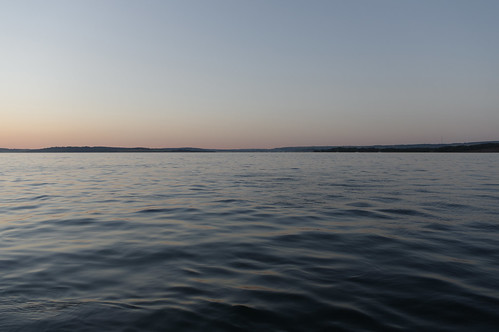