Another tidal gate to make. The tide out of the Solent through Hurst Narrows runs strongly with over-falls, even well engined yachts like Sancerre will struggle to make progress and at springs would be going backwards. The tide would change to be favourable a little after 10:00 and I would need much of it favourable to make reasonable progress to get up the Solent in time to get on the mooring at slackish water so another early start was needed and I left at 06:15. With plenty of room I was under sail within a few minutes of getting the anchor up but I was under engine from about two thirds of the way across Poole Bay due to lack of wind.

I reached Hurst Narrows with the tide still going out but running at less than one knot so I was though quickly and on the home stretch.
There was now the main tidal issue for this leg, I can get onto my trot mooring single handed during the flood tide but it can be very difficult if the tide is running strong and not possible with a strong tide in some wind conditions. Getting on during the ebb is not a good idea as it is very strong but, due to the double high water fortunately only lasts about 4 hours.
The best time is at slack high water, that does not last that long near neap tides (but several hours at springs) or at a partial stand that occurs to a greater or lesser extent about two hours after low tide, these were around 18:00 and 13:00 respectively, a quick passage and a scramble to get off the boat would enable to get home to collect the car on Friday avoiding public transport on a weekend with some trains not running requiring 4 changes of train.
The central part of the Solent was very busy with yachts practising for or positioning for the next days Round the Island race but I managed to dodge them and I picked up the very weedy mooring at the first attempt at 12:45. I did not want to use the dinghy as I would have to leave the outboard in the open until Sunday or Monday (The car park would be full on Saturday because of the RTI race and was close to it on Friday), so after securing the boat the RAFYC launch picked me up and had me ashore 12 minutes before the hourly bus departed so I skipped the desired shower and was up the hill in time to catch it at 14:18 and I was home by 18:30 after the bus, 3 train legs and a taxi. Next week I will be down to unload and clean up the boat. 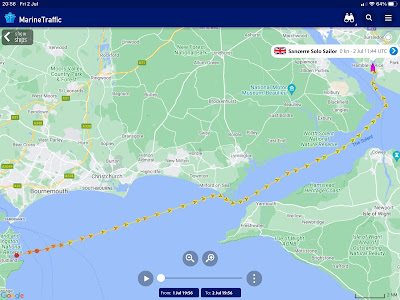 30 miles in 6.5 hours.
Slide show all of my pictures from Studland to Hamble. Page through by clicking the arrows or click in the centre of the pic to view from Flickr in a new window or full screen: 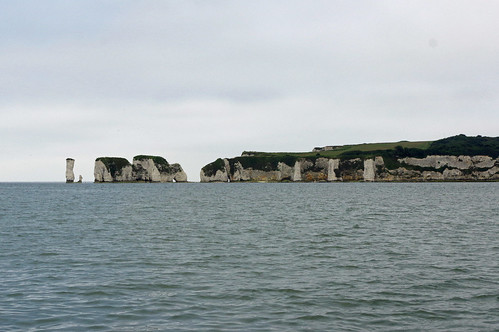 Click here for a summary of the trip and some statistics.
Posted by John Lashbrook at 3:08 PM