Apart from an hours motoring past Goran Haven to Dodman Point this was a very good days sailing although I did have to hoist the spinnaker twice, once as soon as I had the anchor up and again just after Dodman, and gybe it several times before the wind settled down a bit as I approached Gerrans Bay. It was also very hot but having opening windows in the boat, which is unusual, keeps the cabin cooler than on many boats.

Fortunately St Mawes, which a fellow round GB sailor had reported as very busy the previous day with more boats than he had ever seen there, had thinned out a lot, even with some buoys available. I was able to pick a spot to anchor with an easy row from the harbour. I arrived at 13:00 so had plenty of time to do some shopping, although the tomatoes had sold out which was annoying, and in the early evening I rowed to a beach on the north side of the anchorage for a swim - swimming from the boat is no longer practical as climbing the bathing or emergency ladders without shoes on plays havoc with the arthritis in my feet and toes. I'll need to get some bathing shoes, if I can find some stiff enough to give support.
20 miles in 6 hours.
The weather is now doing me no favours, as I write (Thursday, day 6) there is a very good sailing breeze from the east (but a bit much for the dinghy without the outboard which is an effort to get on and off) so I could easily get to Newlyn ready for a quick trip around Lands end to visit north Cornwall or Devon, perhaps even Lundy which was my original goal. But there is a big problem, the met office forecast:

Newlyn is not the place to be in a strong wind with east in it, so the only options are to stay put or to go back to Plymouth or to Fowey, which given the number of boats that have left here in the last couple of days is likely to be full. So I will sit it out here and decide what to do in a day or two, but it does not look promising with winds coming from all directions over the next week and models are indicating some very strong winds at the end of next week (Update: I was right to be wary, this turned into storm Evert (F8-9 winds, perhaps 10 at times) that caused serious problems for yachts in the far south west with a good number dragging their anchors in the Isles of Scilly with 2 life boats and a helicopter working all night to help them, but by then I was home having made a dash for it).
Certainly Lundy is out if I am to get back in a week or two which I need to do, in part to leave time for a longer late summer / autumn cruise. The Isles of Scilly are going to be packed with France out of bounds so I suspect I'll be heading back east fairly soon, timing legs to have suitable anchorages available given the wind on any given day, and of course working the tides.
Slide show of all my pictures from Polkeris to St Mawes, page through by clicking the arrows or click in the centre of the pic to view from Flickr in a new window or full screen: 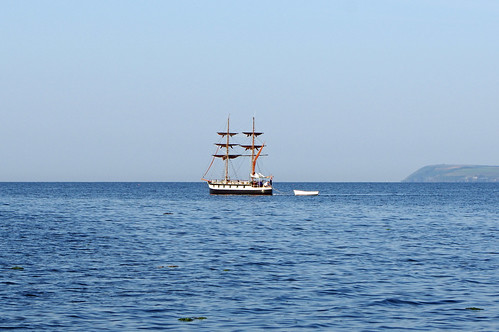 Click here for pics of boats racing off St Mawes.
Posted by John Lashbrook at 3:01 PM