The travails of preparing for the 2020 Jester Azores Pt 1

As noted in my series of posts on the JBC Sancerre was pretty well prepared for the Jester Baltimore this year but, of course, there is always more to do and more money needing to be spent.


I know it is not a race 😀 but with a rhumb line distance of 1,200 miles each way even a small improvement could save a lot of time at sea and reduce time to a bar in Praia de Vitoria.

With Sancerre the biggest improvement I can make is to replace the fixed 3 bladed propeller with a folding prop.

Gori suggest that their folding propellers can reduce drag by 35% and increase speed by "up to 1 full knot", other  published results and anecdotal evidence suggest 1/2 a knot is not unrealistic in F2 - 3 winds before power becomes available (in F4/F5?) to largely overcome the drag.

Increasing an average speed from 3 to 3.5 knots would save 60 hours over the direct 1,200 miles so a saving of one day or even 1.5 - 2 days over the longer actual distance is not completely unrealistic.

After some research I selected the Flexofold as the preferred option and they recommended a two bladed 15x12.

Then the problems started.

From documentation I know that the shaft, new in 2014, is 1 inch in diameter. The installer was able to tell me it has an Imperial 1:12 taper but the size and thread of the retaining nut was unknown so I acquired some thread gauges and planned to dry the boat out ASAP to do some measuring so that I could get things organised to buy the prop before Brexit and a likely further devaluation of the pound increased the price.

But looking at pictures of my prop it occurred to me that there might not be room inside of the folding propeller's hub for all of the threaded part of my shaft. Flexofold were able to tell me that the maximum length of thread that can be accommodated is 30mm. From the picture that is almost certainly not enough so the shaft will have to be shortened.

Of course that can be done, but it is too risky to try and do that plus removing the prop and probably the rope cutter and install the new prop between tides.

Even allowing two tides is not really a starter as the prop shaft may have to be shortened to the extent that the hole for the split pin holding the castellated nut in position may disappear, so any problem and I would be left with the boat in the maintenance dock with no reliable propulsion. The same applies when the boat is antifouled on the Sealift (out for part of the afternoon and put back in the water early next morning and no access out of hours) and she normally stays afloat all year apart from that and power washes.

Lifting the boat ashore for no other reason would be expensive so I'll probably proceed doing things on an opportunity basis.


I have a storm jib that is rigged on a removable Dynema inner forestay but the mainsail only has 2 reefs, these are deep on a small, high aspect sail (> 3:1 and 15 Square metres compared to the 29 Sq m 150% Genoa).

There will only be about 6 Sq m remaining when the 2nd slab is in but this is still likely to be too much in a F8-9 and there was a F9 or more in the area in June this year.

For the Achilles 9m the World Sailing offshore special regulations mandate a trysail of =< c 4.6 Sq m but fortunately there are no construction rules for the Jester!

I have no room for a separate mast track and the mast gate, modified for sliders, is not suitable for a Trysail - all of which is a good excuse not to have one as I don’t really want the aggro of setting a Trysail on a 30 footer single handed. And Robin Knox Johnson agrees with my prejudice against them!

So this winter a third set of reef points will be added which is a lot cheaper than a trysail or replacing the mainsail!

Of course things are never that easy.

I now have to set the boat up for 3 reefs. Fortunately, in this context, the main boom has external reef lines taken to cars on a track and there are 3 cars.

Apart from the inconvenience of lines dangling in a loop as they go forward and the extra external blocks needed to get the lines back to the cockpit this is an excellent system as the end of the reefing pennants are tied to the cars with the turning block and can be moved to the ideal position rather than having the turning blocks at the end of the boom.

The main issue is a shortage of clutches on the cabin roof. I have 6 a side and they are all used (the spinnaker halyard, pole uphaul and the spare jib halyard are all taken to the mast, I prefer to have the spinnaker halyard there as, with a snuffer, I can drop the kite with just one visit to the foredeck and usually hoist in one as well without using a winch).

Although I may be able to fit one extra clutch aside I probably can't get more lines through the spray hood without risking damage to it. I don't want to use the old reefing horns or re-reave lines for slab #1 to slab #3 when #2 goes in - I would have >30 knts over the deck when #2 goes in (probably after the storm jib is hoisted) and the idea is not to have to move out of the cockpit in rough weather unless absolutely necessary.

Some investigation on the boat is required but, assuming I can't fit additional clutches, I will probably discontinue the Cunningham which is rarely used and could be replaced with the handy billy if really needed.

A second clutch may be freed up by moving one of my 3 general purpose foredeck lines (used for the pole downhaul, pole fore guy when running goose winged, asymmetric spinnaker tack, storm jib tack, etc.) to run via some substantial blocks on the toe rail to a cleat aft – I only use the 3 lines together when I have a main preventer rigged and that does not need a winch or clutch, I would lose a little flexibility but everything would work.


It turned out that the webbing strap used to retain the spray hood when folded was hiding part of the reinforced area that could take one more line, apart from the convenience a single clutch, although not cheap, is less expensive than all of the hardware required to route a line along the toe rail so I now have 7 clutches to starboard and will soon have 7 to port.

The next jobs will hopefully be more straightforward: 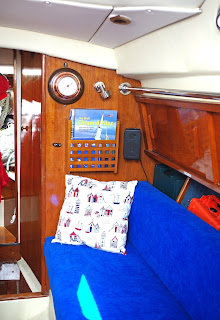 Added 2nd Sept after being out in a F6 gusting 7! 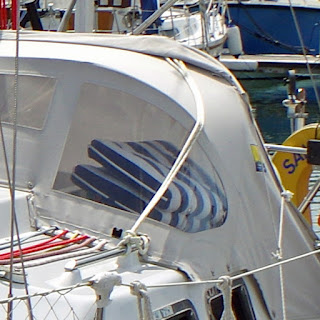