At last a window long enough to get somewhere meaningful, I needed to be at the north end of the Kyle Rhea with a favourable tide, there is no point in trying to battle a tide that runs faster than the boat will go even at Neaps, and it easies to go through just after the tide turns rather than go through the big eddies and over-falls that are at their strongest during the mid hours of the tide. The optimal time was 14:00 and it would take 2 - 4 hours to get there, rather than hang around all morning and then have an adverse tide through the narrows under Skye Bridge, I decided to leave early and explore the eastern end of Loch Elsh and the lower end of Loch Duich where there is a well know beauty spot and En Donnan Castle.

There was little or no wind so I motored for three quarters of an hour going slowly at a little over 3 knots as the batteries were quite low (thanks to the failed wind generator) and the alternator was already stressing it's belt continuously generating over 50 amps.
A variable and gusty wind set in, I would probably be on a run through Loch Alsh and I was in no hurry so I didn't bother with the mainsail, just as well as I was winding the headsail in and out for much of the trip. Unfortunately, the rain came back and by the time I got to Skye Bridge I was wet and cold, the new waterproofs were relegated later in the day in favour of an old set. 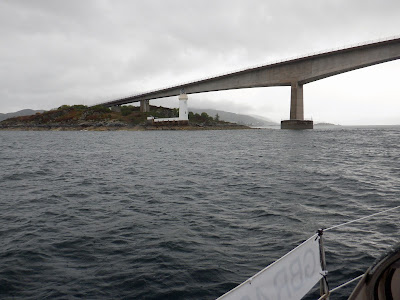 I got to the entrance to the Kyle Rhea at 10:30 but being wet and cold and with rain starting again I decided to forego my site seeing trip and anchor, change clothes, warm up and have lunch. The diesel heater really was a good idea, by lunch time I was nice and warm and the weather had changed for the better.
I weighed anchor at 13:15 and shortly after found the tide had turned a bit early so I headed through and had a trouble free passage although I did go a bit wide to keep clear of a fish farm service ship coming along behind.
It was nice to see an otter fishing, last year I saw none but the year before I saw three families in the Kyle and an individual in the Sound of Sleat. Perhaps it is not surprising they are seen here, even with the strong tide, as Gavin Maxwell was at the Sandaig Islands about 4 miles further down the Sound where his book "Ring of Bright Water" is set.
With a fair tide I made good time so rather than stopping overnight at Ornsay I went a bit further to Armadale bay. As things turned out, with very light winds, I had a good quite night but I would probably not stop there again as the anchorage is deep with lots of weed. 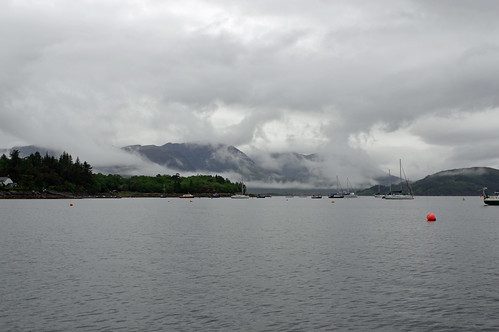 27 miles in 10 hours.
Click here for the next leg to Tobermory.
Posted by John Lashbrook at 3:19 PM