Sancerre stood up to some heavy seas very well, the only issue occurred running down from the Fastnet when a jib sheet caught on the snap shackle pull ring on the preventer as I was rigging it and pulled the pin completely out. A quick knot sorted that until I got into Baltimore when I spliced on a new shackle. This is not the first time this has happened to me, last time it was a spinnaker guy, but I have not come up with a solution except to buy stupidly expensive snap shackles without rings, not many companies make them, those by Wichard start at £130 and those by Tylaska at £160, and especially with 7 vulnerable shackles (excluding the spinnaker Halyard) that does not appeal.

Modifications & Additions being made: 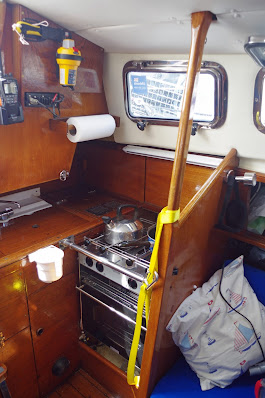 Galley: I had already installed a crash bar in front of the cooker and thought that I could wedge myself in whilst using it, that proved optimistic when on port tack in the conditions we experienced.

A spare life line and a folding pad eye from Boson's stores solved that with the pad eye on the aft bulkhead and the webbing line tied to the vertical hand hold forward. The loop on one end of the harness line serving as a convenient place to hang the clip when not in use.

Subsequently I added a second pad eye to the left of the companion way so the  safety belt can be used when using the sink. 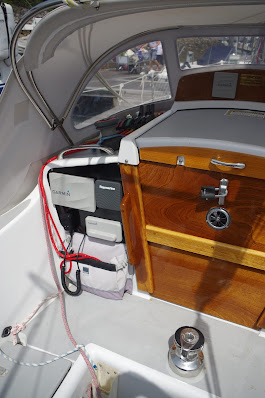 Cockpit hand holds: I spent the best part of a day on deck almost all of the time because of the number of boats around - in addition to fishing boats etc, going round the Lizard 3 Jesters (Sancerre, Tranquillity & Drifter of Mochras) were within 1 - 200 yds. and at least a couple more (Guppy Unchained & Flamingo Lady) were close by.

Close hauled in 20knts + with a nasty sea I was pretty knackered holding on to a coach roof winch to stay in place, made more difficult on the long port tack by the Plotter & VHF being on the port bulkhead so I could not lean again it.

I have installed a couple of stainless grab handles that are low enough to go across the  top of the coach roof and not interfere with the winches. Also teak grab handles either side of the main hatch which are reachable when sat down. 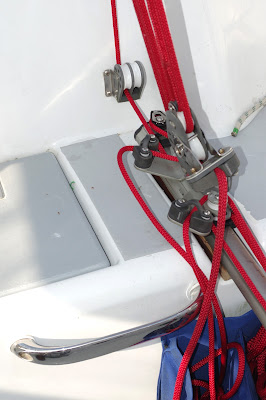 Subsequently I put stainless grab handles on the edge of the cockpit seats to enable me to pull myself up from leeward (Arthritis makes that difficult) and as another place to hang on too. 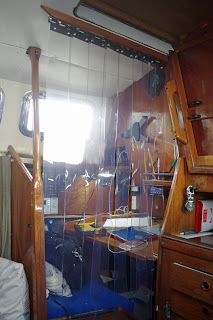 Nav Table: Ok in normal circumstances and on starboard tack but on port tack when I was doing serious navigation I was sliding to starboard and my head was banging on the side of the coach roof.

A thick double kapok cockpit cushion on the outboard side solves that problem but it has to be a dedicated one as mine at least are permanently damp.

Subsequently I have installed additional storage for small items, principally my reading glasses, and additional security for the laptop on the chart table .

Hints and Things to Remember:


Pump out the Bilge: Yet again I forgot to manually pump the bilge before rough weather. In Sancerre the automatic bilge pump sits above the hose for the manual pump so there is a residue in the sump. After a few hours of pounding there was an oily mess on the cabin sole. This winter I will see if I can get an automatic bilge pump lower down.

Close the Dorade Vents: I didn't and got unacceptable amounts of water into the boat. Because of their distance above the headlining and the small holes in it for access they were very difficult to close at sea. I am making up a tool to reach in to do it more easily.
Update: When I was "forced" into extra boat maintenance by the coronavirus pandemic, I replaced the headlining with timber and came up with a better solution, a piece that hinged down giving good access. 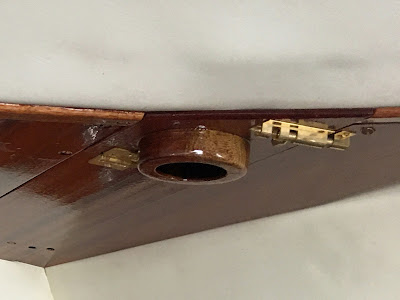 Open the Dorade Vents: I left them closed in Baltimore and on Sunday afternoon after being battened down since the previous evening I suddenly had a serious condensation problem with cushions, a sleeping bag, berth cushions and some spare clothes wet.

Put Cling Film over the Loo: This is something I have been contemplating for some time as when healed and in rough weather, water from the toilet sloshes out into the compartment. Closing sea cocks does not help because of the water in the anti-syphon pipe work. The solution is to put cling film over the bowl and under the seat. This worked well and can easily be removed for use or revert to bucket and chuck it, at least some of the time, in rough weather.