As those who have ploughed through all of my posts or who followed me here or on the Achilles Flickr site as I made the trip will know I had some fairly major equipment problems on my round GB but considering that because of Covid-19 restrictions, I did not have time for a shake down cruise or even a single trip after winter lay up, I had remarkably few other problems.

This one has not been mentioned here or on the Achilles owners forum.

Some years ago a previous owner installed an external voltage regulator for the alternator to give more intelligent and far quicker battery charging, usually a 300 - 400% improvement and I have seen 40+ amps going into the batteries for sustained periods.

After relaunch I noticed that it was showing fault lights that normally indicate wiring problems which I put down to damage when the engine was moved to replace the cutlass bearing last winter. I replaced the first section of the duel negative lines and the fault went away, however that was temporary and the fault reoccurred as I left in July.

Fortunately the system is fail safe and with the external regulator in fail mode the alternators internal regulator takes over so I was still in reasonable shape, particularly with a fair bit of motoring and with a good contribution from the wind generator, although unfortunately not from the solar panels which did not see much sun after Lands End! However the primary domestic battery bank was loosing the first 15% to 20% of its charge very quickly before stabilising. I have 2 domestic banks, one of 250AHr and one of 200 AHr, not ideal but due to space issues they are too far apart to work well as a single bank and they are of different capacities also not advised in a single bank. After my return I did some extensive fault finding including resetting the battery monitors in case that was at fault rather than the battery.

I completely rewired the external regulator initially using very short wires as a check (long ones being a potential problem) and checked connections inside the regulator, voltages etc. but to no avail, the regulator had failed.

When replaced, the charging side of the problem was fixed and when I checked the failed regulator the reason for my battery problem became apparent, the regulator was set for flooded batteries but the previous owner had replaced them with sealed (VRLA) types, this means that the batteries had been charged too quickly, this causes water loss as pressure exceeds safe limits and gas is released to the atmosphere, being sealed this can't be replaced so the batteries loose capacity and will have to be replaced. Update: the two batteries in bank 1 were replaced with two 120 Amp AGM batteries, as these can be safety be discharged by 80% so there is a significant increase in usable capacity,

Fortunately the second bank has had very light use, is newer and has not gone below about 75%, and that far only on a few occasions. With the engine starting easily the starter battery also never went low. In both cases much of the recharging was  from the renewable systems or shore power and the batteries appear to be OK, at least for the moment. Update Jan 2022: Unfortunately the 2nd bank is now giving problems after 3 & 4 years use, with the indicators showing they need to be replaced, almost certainly due to low water / acid levels, to save some weight and cost and to free up some storage space I will replace the pair with a single 120 Amp AGM the same as Bank one which, being the same height as the low profile VRLAs will fit. With 80% DoD I'll end up with a usable capacity of 288 AHr, more than enough. The engine battery will probably be next :-( .
Having had to rewire (and relocate the rather bigger replacement controller) I took the opportunity of tidying the electrical panel up a bit,
primarily to reduce the number of wires going to any one terminal. Unfortunately it still looks a bit of a mess but that is what happens when you do multiple upgrades and have limited space.

Due to shifting locker floor boards. This was covered in a previous post so will not be repeated here.

Similarly this was covered extensively in a previous post. 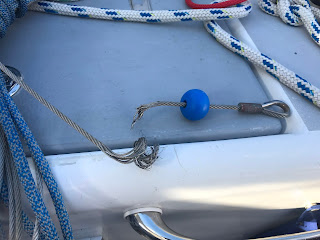 Broken after it wrapped round the forestay whilst the headsail was being furled when I was going from Blyth to Filey, as explained in some detail in the post about that leg of the trip. that was because a previous owner had not installed a halyard diverter when a furling system was installed.

A mast mounted diverter was installed shortly after I go back to the Hamble and the halyard repaired.

This was an intermittent pain throughout the trip until they failed completely, initially I got the radio link between the top of the mast and the controller working by moving tinned food and other metal items further away from the direct path between them, and then by moving the control unit further forward in the boat but in the end the signal became too weak, failing for over 20 hours of sailing coming down from Orkney then failing completely.

The NiMH battery in the head unit was new last winter and has a service life of 3 - 4 years and it is thought that the fault was in the small solar panel that keeps it charged after what looks like water intrusion. Rather than replace it like for like I have purchased a wired version of the sender that should be far more reliable, unfortunately the cable arrived too late to replace it at the same time as the halyard diverter was installed and it looks like that will not be done until the boat goes back in the water in March.. 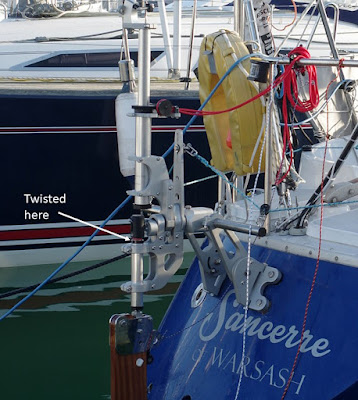 As was mentioned in a few posts a careless sports fisherman bashed the SeaFeather when I was in Stromness marina although the problem did not become apparent until I was on route from Peterhead to Ethien Haven (Montrose) when the wind instruments gave up the ghost. Although I was initially cautious it appears that my repairs made from the dinghy whilst in Blyth fixed the problem.

The tube holding the servo blade had rotated at the top joint and by using the blade as a leaver and a very big screw driver to hold the top I got it sorted.

Spinnaker Sheets: Twice a flogging cruising chute caused a snap shackle to open, that has happened once before with the symmetrical spinnaker so I have now replaced them with a more up market type which is specifically designed for sheets which will hopefully be more secure and also easier to open when under load. These are double the price of a direct replacement, it was not hard to resist the temptation to buy some of similar size on offer at 10 times the price.

Freshwater leak: Some water leaked into the compartment below one of the bunks, that was easily tracked down to a leaking fresh water pump supplying the galley, a complete new pump was only £10 more than a service kit so a new one was installed.

Throttle lever: Failed when coming into anchor at Broadford Bay, Skye when I could not get the engine out of gear, with plenty of room that was no problem, I just cut the engine, did a 360 to slow down before dropping the anchor, I made a quick fix at the time by tightening a grub screw and later cleaned out splines that were clogged with grease and refitted.

Cooker mount: In rough seas the cooker started moving about, the cooker had to come off the gimbles and the bolts securing a pad refitted.

That's it!  The work list this winter is not going to be that long with anti fouling by far the biggest job, probably followed by the battery replacement as I will take the opportunity to tidy up the battery compartment wiring.

Not able to use the cockpit table more than a couple times!

The boat was filthy a month after being cleaned and despite scrubbing the waterline on a couple of occasions and some work by the diver when the prop was being fitted there was weed and crud all over the place. I was seriously disappointed with the stupidly expensive top of the range anti-fouling I used last winter and will revert to the merely seriously expensive one I have used in previous years.
Update: The after haul out it became apparent that the antifoul had done a decent job well under water but the boot line and a few inches below were heavily fouled as was the rudder - places where the sun gets to.

A related issue was weed attaching above the antifouling, partly this will be due to the boat being heavily loaded with fuel, water food etc. and partly due to the boat having put on weight over the years with more batteries and a bigger engine but I suspect it is also partly due to the "boot line" (the white strip of antifoul), being a bit lower than is should be and I will move it up a bit this winter.

Posted by John Lashbrook at 4:36 PM

Email ThisBlogThis!Share to TwitterShare to FacebookShare to Pinterest
Labels: 2020 Round GB, Upgrades and maintenance