This is an expanded version of my response to a query on a Facebook group regarding washboards. The original poster was considering fixing them in so that they would be watertight and using the sliding hatch alone, a couple of us though that was not advisable as it would be dangerous getting in and out and, at least for me, next to impossible with the spray hood up.

Sancerre came with some very old washboards in 3 pieces and no Fastnet latch which could have been problematic in very rough seas. A Fastnet latch is one that can be operated from both sides and when fastened stops the hatch moving and the washboards falling out during a roll over, it is named as a fix for the problem after the 1979 Fastnet disaster where several boats lost theirs, including at least one OOD34.

In addition to the Fastnet latch I can secure the washboards with lines down to an eye rather than using sliding bolts, it is much easier to fit, cheap, easy to operate and works well.

The new washboards are in 2 sections which are easier to manoeuvre into place than a single piece board (suggested as an option by the OP) and can provide some good ventilation when needed. Usually just the lower piece will provide sufficient protection from rain when sailing.

The top section has a strong-back on the outside going down, overlapping the lower section so there it is reasonably watertight and windproof and along with the thick premium ply the whole lot is very strong to withstand any wave coming over the stern. All overlaps drain outwards if any water should get into the joint. 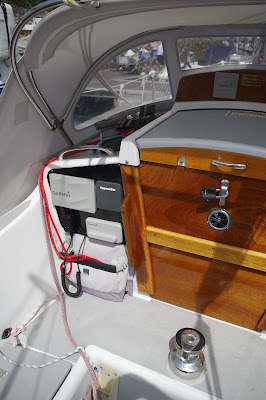 The top section has a lockable "Fastnet" latch to the sliding hatch cover which has a batten inside going down overlapping the washboard. Its not completely waterproof during an inversion but water ingress would be limited.

With the lower washboard in place it is very unlikely that a pooping wave would breach it although in serious conditions I would not risk it other than when getting in or out.

In seriously rough conditions you need to be able to look astern before opening the hatch in case you are about to be pooped, the previous boards had a window but that weakens the structure, is tricky to make and fit (unless bought off the shelf which is expensive) and does not provide much light.

Instead I fitted a butterfly vent which I can peak through and which provides some additional ventilation, the boat has little ventilation aft so a through draft does not build up without it. On the mooring  the back drop to the spray hood which reaches to the top of the winch, stops rain coming in and if it was seriously wet whilst sailing I can close it.

I made the boards from premium hardwood marine ply that is guaranteed for 25 years and certified by Lloyds for structural use in high risk areas, all 11 veneers are Sapele and it is considerably stronger than normal marine ply. The strong-backs are made from reclaimed oak and its all held together by screws and glue. The old washboards, slightly modified and with a Fastnet latch are carried as a spare, just in case, they are also useful as a temporary replacement when the new ones are taken home to be re-varnished..