Installing an anchor windlass on an Achilles 9m

First, I am not a navel architect or a shipwright so use this design at your own risk. Having said that it works and I believe I have seriously overengineered it to be on the safe side so its heavier than necessary - but should stand up to use, it had done so far!

Another page written as a time waster during Covid lock down! But it might be of use to someone.

There are several places where a winch can be installed.

Red Marlin has the winch at the front of the locker, that would be easier to install but Tony (the owner) reports that "[..] the locker is half as big because the locker lid was cut in half [a slight exaggeration!]. .... [it] gives a good lead to the bow but does limit the available space." he also confirms the need for a lot of work flaking out the chain.

And raised up like that for a decent lead it also looks to be just waiting to catch ropes especially if you fly a spinnaker.

A second option is to do much the same across the back of the compartment with a bigger reduction in the usable length - the winch cannot extend more than a few inches under the deck aft, there is more room forward.

A third option is to install it to one side of the locker lid as was done as an original fit on A059 "Tranquillity" but this requires the bow roller and assembly to be set at an angle, so its not a realistic option as a retrofit 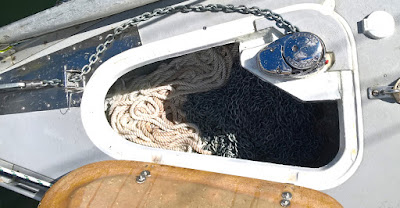 I decided to put it in one corner for best access to the locker, I can still get a long oversized CQR in and it is certainly easier to get the Delta in an out and to flake the chain than if the lid was shortened. Reinforcement however is a bit more complicated than for other configurations.

There is a transverse beam across the back of the locker that also supports the mid deck U Bolt, it is difficult to check because it is glassed over except for a small section exposed around the U Bolt which looks OK. The U bolt is used for the storm jib and its stay, that failing would be very bad news so I assumed that the beam was compromised and  reinforced it as part of the project.
This is what I did:

On the back of the chain locker I put 2 layers of 15mm, Lloyds certified, 25 year Sapele marine ply (IIRC this was used throughout but there may have been one layer of thinner ply in the platform to get the level right). They go right across and are under the cross beam. Clearly to get them in, each had to go in in 2 pieces with the cut staggered. Each was coated with West System epoxy before installation (as were all pieces) and bonded together and to the back wall with epoxy + high density filler with screws holding things together whilst it cured.

In the forepeak I put a sheet of ply over the back of the locker, which also looks rather better than the carpet it replaced.

The whole lot was then bolted through, replacing many of the screws put in earlier. The pieces in the locker were then bonded to the hull, deck / beam and to the bottom of the locker with glass tape and epoxy.

To build the platform for the winch I first fixed a 15mm piece of ply flat on the back of the locker, IIRC about 8" (c20cm) wide running from the floor to just below the toe rail, as will be seen below the height is important.

On either side of that vertical pieces of ply run forward with the inboard piece cut off at at an angle to give access to the chain, a bracing piece goes between them to keep them in place and to help secure the next layer. All are screwed in then bonded in with glass mat and tape. 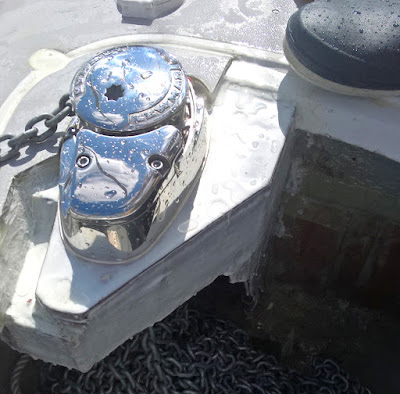 The first layer of the platform rests on that open box, it gets wider as is goes out to the toe rail, the edge is roughly shaped to the curve of the hull with cut outs for a stanchion and all but two of the though bolts. Two longish sections go right under the hull / deck join and two toe bolts through the hull / deck join and toe rail were taken out and replaced with longer ones going through the lot. Getting the platform lined up correctly was a bit of a challenge and some packing was required at one end as the toe rail and the edge of the chain locker slope differently. 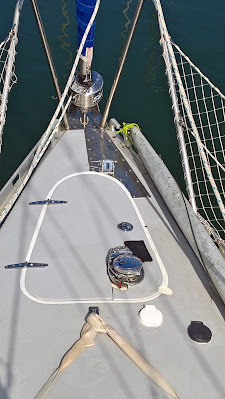 Before fitting I cut a hole in the first layer of the platform for the winch to go over, at this stage larger than the standard cut out to give better access, again this was screwed to the other pieces and bonded in with glass mat / tape, on the under side only at this stage.

I then started building up the platform with each piece of ply going under the deck to starboard and back to the aft end of the locker. The two large circular holes and holes for the bolts required for the winch were cut before fitting using the supplied template, each layer was bonded together with epoxy + filler and screwed in as it was put in place. I put a cut out in the last two layers for the chain return into the locker (see pic) and when close enough I stuffed the gap between the platform and the under side of the deck with glass mat and epoxy.

A nail biting bit came next when I cut the corner off of the locker lid for a satisfyingly close fit, after a bit of work with a file, to the winch forward and inboard, sealing the exposed edge with epoxy. The cut off piece was then shaped to fill in the space between the winch and the edge of the locker (top pic and above). Some glass and epoxy bonds it in place at the right height and more went on the exposed surfaces to fully encapsulate the timber. The "Thumb" hole originally used to aid the opening of  the locker was filled and one day I may remember to put deck paint on some of it to camouflage the change.

The final layers of epoxy had white pigment added to make it look rather better.

Rubber flaps were attached to the lid to cover the chain return and reduce the amount of water that can get into the locker, subsequent to the pictures I put a stainless plate over the front ends to keep them in place and they have so far lasted for 3 years with lots of use. To control any water that does come through I stuff the locker with fenders when at sea which reduces how much can be held there before the drains work, it also stops the anchor and chain from crashing about in the locker.

The stainless plate forward protects the deck from thrashing chain, although that is rarely severe as I let the anchor down under power for better control and to prevent dumping lots of chain on top of the anchor.

The chain stopper has reinforcement under, winches should not be used to take the strain when anchored and a stopper is better and easier than taking the chain to a bow cleat.

Foot switches are normally used to control the winch but I have a wired remote in the cockpit in case I have to drop the anchor in a confined space with a wind or current to contend with. The Master switch / CB is on the electrical panel and is connected with oversized cable to minimise voltage drop. 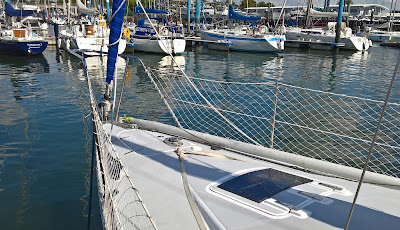 Labels (works on posts but not pages)