This is a long leg complicated by windfarms, gas rigs, sandbanks and strong tides in fairly restricted waters towards the end. 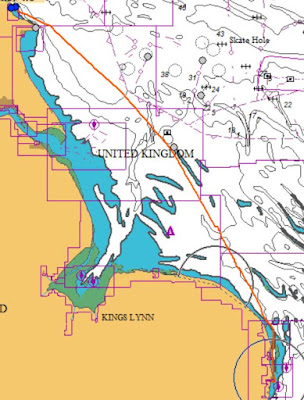 The start was at a reasonably civilised 07:00, much earlier and I could have arrived in Lowestoft, a commercial port I would be going to for the first time, in the dark. Again there was much ducking and diving to avoid lobster pots which extend several miles with a few extending well off of Flamborough head.
With light winds, mainly from the south east, there was a lot of motoring, initially with a moderate sea left over from the previous gales but that was largely gone by the evening. To start with everything was pretty straightforward with minimal other traffic apart from wind farm support and construction traffic that was not generally close enough to require evasive action.
That changed, big time, as it became dark as a large number of freighters and passenger ferries converged on a choke point between Cromer and the Dudgeon wind farm.
Things were fairly fraught for a while as ships were coming from multiple directions,  I was very glad of the AIS showing their name, heading, speed and critically the bearing from me - a steady bearing being bad news! - as well as a computed closest approach which is useful but without knowing the rate and direction of the bearing change you don't know if you are going a safe half mile behind or a decidedly unsafe half mile in front and many of the ships were passing far closer than that, which sometimes required brief discussions on the radio.
This was quite a drawn out process as the tide was against me so I was only making two or thee knots over the ground.
As the day broke I was close to land but before I entered the home leg inside the Scorby Banks a survey vessel requested I make a diversion to give them a clear run so a couple of miles were added to the trip.
The tide had now turned and I made quick progress down the channel making 7 - 8 knots over the ground.
I arrived at 09:30 to find Tony, owner of a sister boat "Red Marlin" waving to me from a vacant pontoon and ready to take my lines. Thankfully although very tired I made a good 3 point turn and berthing so did not have to make any excuses and then repeated the feat when asked to move to a smaller berth to make room for a larger boat :-).
We had lunch in town and a light dinner in the excellent Royal Norfolk and Suffolk Yacht Club. Thursday, Tony returned to his berth further up river and I had a rest day before undertaking two more challenging legs. Lunch and Dinner at the RNSYC were the culinary highlights of the trip.
135 miles in 26.5 hours.

Lowestoft to The Downs

Posted by John Lashbrook at 5:49 PM

Email ThisBlogThis!Share to TwitterShare to FacebookShare to Pinterest
Labels: 2020 Round GB, Lowestoft