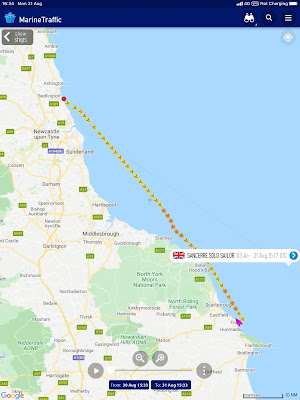 I finally got away from Blyth at 01:00 on Monday morning (the 31st), the early start after a few hours sleep was to get the benefit of two favourable tides and one adverse rather than the reverse. I also had to press on as more strong winds were forecast for late Wednesday and Thursday and I wanted to be in Lowestoft before it arrived.
The sea was still running quite high, especially a few miles out when still close inshore so I moved an extra mile offshore which improved matters somewhat. The wind was about force 3 from the north west, my wind sensor had packed up again, this time permanently, so all wind strengths and directions from here are on are estimates.
Fortunately work I had done in Blyth to the wind vane steering to realign the servo blade had done the trick and although perhaps not 100% it was working well enough to steer the boat to the wind direction, at least in moderate conditions. I will need to refine that when I get it home or send it back to the maker. To be on the safe side I will not trust it to work in all conditions and relative wind directions so will have to be particularly cautious setting out if conditions look "iffy", I will also load additional diesel at Lowestoft so that in a worst case I can motor home using the autopilot.
I was able to sail much of the way but more problems happened  a few miles north of Whitby when the wind went light and I attempted to furl the headsail so as to motor and it stuck half in and half out. A good deal of struggling later I had it free but the halyard broke when I re-tensioned it so the sail had to come down to be re-hoisted on the spinnaker halyard. A good job it happened in light winds as getting the sail off in a strong wind is difficult at best, I know I have done it.
It turns out that whoever installed the furling system (well before I bought the boat) failed to fit a "halyard diverter" required when the angle between the halyard and forestay is less than 10 or 15 degrees as it is on the Achilles, they only cost  £10 - £20 and a couple of rivets, now I'll have to fit one with the mast in the boat and have a new eye put on the shortened halyard.
The last 30 miles was a combination of sailing and motor sailing, the last couple of miles through the largest dense collection of lobster posts I have ever seen, I lost count of the number of course changes I had to make to avoid getting one round the prop, I have no desire to test the rope cutter!
Filey has no harbour but a natural stone barrier know as the "Brig" gives protection from the north although the water inside was quite calm the heavy seas from the last few days did result in some small waves coming in and with the tide circulating around the bay holding the boat broadside to them all night it was quite uncomfortable, however being tired after the early start I slept through it.
74 miles in 15.5 hours.

Posted by John Lashbrook at 4:09 PM

Email ThisBlogThis!Share to TwitterShare to FacebookShare to Pinterest
Labels: 2020 Round GB, Filey