A long beat in light winds, the weather was generally good until south of Lulworth when fog and drizzle reduced visibility to half a mile or less and on went the radar, something I don't normally do when the engine is not running.

When I was about 4 miles from Portland there were at least a dozen small boats showing ahead on radar but not AIS plus a couple of huge P&O cruise liners and a couple of tankers, the ships almost certainly hiding other small boats. Some of the small boats with poor or no radar reflectors were not showing up until within half a mile, so I decided to stop sailing as the headsail makes keeping a visual watch whilst watching the radar difficult so I changed to the motor. Naturally 10 minutes later the sky cleared and it was an easy arrival.

Slide show of my pictures from Hamble to Portland, page through by clicking the arrows or click in the centre of the pic to view from Flickr in a new window or full screen: 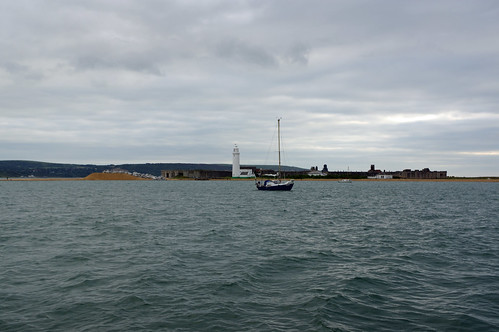 Posted by John Lashbrook at 4:25 PM