The trip around the lizard was in blustery conditions with the wind varying between F4 and F6 but mainly F5, with the tide against the wind I was sure to give Lizard Point a wide berth. With the wind in the NE there was a reasonable chance of going direct to The Isles of Scilly arriving in day light but that was not to be as the wind backed to the east making it a slower (and uncomfortable) dead run and the forecast suggested the wind would drop substantially. As I did not want to arrive in the dark I headed into Mounts Bay to spend the night. 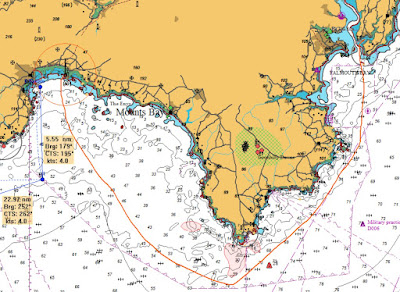 Newlyn it not good in an easterly and anchoring off potentially very uncomfortable, even untenable. That leaves anchoring off Mousehole behind the island or, my preference behind St Michael's Mount, the pilot was however somewhat equivocal saying the latter was only suitable in settled conditions, so I rang up a sailing contact who sails from the Fal and Helford, he in turn contacted a friend who has sailed the waters for 60 years and in his early years fished them professionally, his recommendation was emphatically for St Michael's Mount so there I went to spend a peaceful night.

36 miles over the ground in 7 hours.
The wind was initially moderate on Wednesday and I set off at 08:00 with adverse tide for some hours but making good speed. The wind increases to F5 which with wind against tide generated some serious waves south of Lands End and being on a dead run the boat was rolling heavily at times especially when hit by breaking waves. I sailed with the full genoa boomed out to starboard and the mainsail with one reef to port stabilised by a preventer to the bow, although the full main is only half the size of the genoa the reef reduced the roll and the tendency for the boat to round up when hit by a wave.
A few miles from St Marys the wind started to veer and I had to gybe, a lengthy process with a boomed out headsail and a preventer rigged, it proved a waste of time as the wind started to drop and the boat became less stable so I put on the engine for the last 4 miles through some very rough seas. 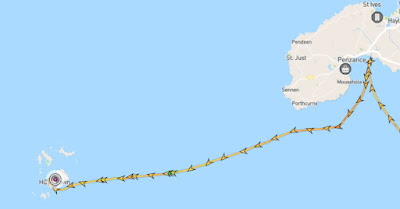 41 miles over the ground in 9 hours.
Slide show of my pictures from St Mawes to St Marys, page through by clicking the arrows or click in the centre of the pic to view from Flickr in a new window or full screen: 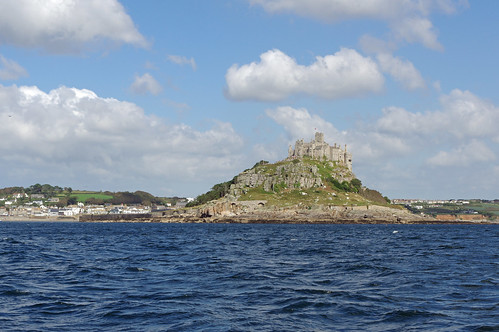