Winds were still lighter than the forecast F3 -5 so a long trip across Lyme Bay was in prospect but if the forecast was correct on wind direction I might clear Start Point. 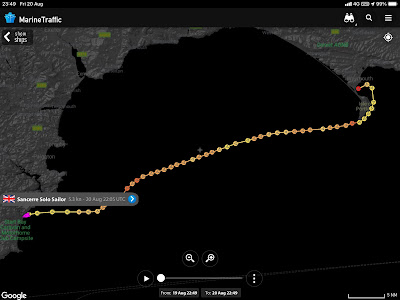 Winds were rather lighter than forecast but I had decent sailing until early evening when I was off Dartmouth and the wind started to veer and drop further. There was some light relief as dusk fell when a large pod of dolphins briefly followed the boat, one youngster breached a yard from the boat getting me wet from the splashdown.
Finally the wind disappeared and rain came reducing visibility so I diverted to Pilchard Cove at the north end of Slapton Sands rather than mess about trying to avoid lobster pots off Start Point under power with rubbish vis. The rain stopped and the arrival at 23:30 was drama free.
56 miles in 16 hours.
I left earlier than planned because the wind had moved round to the north east putting me very close to a lea shore and with the boat lying broadside to the waves she was rolling badly. I motored out past the Skerries Bank then sailed south against the tide, the light wind dropped so I put the motor on as I approached Start Point and unfortunately had to keep it on as the promised F3-5 did not materialised and the choppy sea, presumably coming from winds well to the south meant that progress was very slow or on existent except for the tide so I motored all the way to Cawsand Bay.

The following was taken off of Start Point, there were lots more than shown here, it may be the "super pod" of 80 reported in the area that scared off a shark. I was amongst them for about 20 minutes. Play enlarge as much as you can.
Look for the young animal from 30 secs till the end, I wonder if this is the one that splashed me the previous day?
33 miles in 7.5 hours.
Click here for day 6 & 7.
Posted by John Lashbrook at 6:18 PM