Lift out for the winter.

Sancerre was lifted out at Deacon's yard, Bursledon just before Christmas, fortunately it was a nice day so the two mile trip back to the RAFYC in the dinghy to get the car was actually quite pleasant.

I was very pleasantly surprised at the lack of weed on the hull, by far the best result I have had from an anti-foul even though this was the first season she had not been power washed mid season. This was largely due to the number of miles I travelled spread over the season which helps the self ablative antifouling to work, but contributing was a lot of work over the previous two seasons on surface preparation and building up a good covering so that it did not wear through or come off. There is no doubt that getting three coats on over a period of days or weeks allowing each to cure before the next coat is superior to getting a coat on between tides or using the sealift (2 coats in an afternoon and back in early next morning). 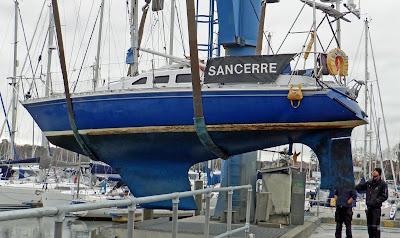 Posted by John Lashbrook at 3:30 PM

Email ThisBlogThis!Share to TwitterShare to FacebookShare to Pinterest
Labels: Bursledon, Upgrades and maintenance