Sancerre came with a long defunct "Eberspacher" diesel fuelled warm air heater, last years very cold cruise has convinced me it is a good idea to have one (or at least to take the electric heater for use in marinas!). The Eberspacher heater is rather expensive, and some cheap Chinese made look-alikes have a rather dodgy reputation, so I took a middle path and went for a Russian made "AutoTerm" (previously Planar) which has had some good reviews and is more sensibly priced.

Unfortunately, it is not a direct replacement, the Eberspacher had been mounted in the port cockpit locker, right next to the Gas line, almost impossible to get at, mounted on a rather fragile piece of ply and taking its air from a rather smelly locker, since I got rid of the bladder tank and sorted out a few other things it is not as smelly now but I do keep diesel cans in there so it will always have some niff.

Also having put the new large fuel tank in this locker putting the heater in there with it would not be a good idea.

Although a little cramped, a better location is the Lazarette which already has a good-sized dome vent for the air supply. The only component to be re-used will be the exhaust vent on the transom.
Most of the old fuel supply was removed some time ago, but not the first part, whoever installed the bladder tank ran the heater fuel supply pipe down the breather for the tank from a point well below the level of the fuel filler, that meant if you filled the tank up into the fuel filler pipe, diesel leaked out through the entry point. And from the breather itself which no longer ran up to the original vent fitting, all of that was fixed with the new tank.

I am leery about using the main tank to also supply the heater, even though the newly installed fuel sender is as accurate as they get, there is always the risk of letting the heater use rather more than intended. More importantly putting a T piece in the fuel line leaves open the possibility of syphoning diesel out of the tank if there is a fault in the heater. And if a T piece is used there is a risk of introducing air into the engine supply which inevitably would happen at an embarrassing moment when the engine was needed.

A separate 7.5 litre fuel tank is the answer and in theory holds enough fuel to operate the heater for between 32 and 75 hours. That fits well immediately in front of the rudder tube, biased to starboard to help filling and to keep it clear of the engine exhaust. The mounts will be bolted through the back of the life raft stowage space. Filling directly could be problematic even with a funnel but I already have a cheap (c £18) battery powered pump for transferring diesel so that is not an issue.

The fuel pump (that has to be below the lowest fuel level) and the fuel line, are mounted on a timber strip (the remains of the Teak capping piece on the galley surround recently removed) running out and up to the port side near to the heater.

Each visit to the boat requires 3.5 - 4 hours of travel and with the boat out of the water I can't stay on board so as much of the assembly as possible was done at home.

With limited space to fit the silencer I opted to mount it vertically and close to the heater which gives more flexibility in routing the exhaust to the vent. It would probably be self-supporting but better safe than sorry and to avoid potentially warranty issues by not following the instructions I mounted it to a block of Vermiculite fire brick fixed to the mounting bracket, that will prevent conduction taking heat directly to the mounting bracket and will shield the fuel line which will route behind the block. 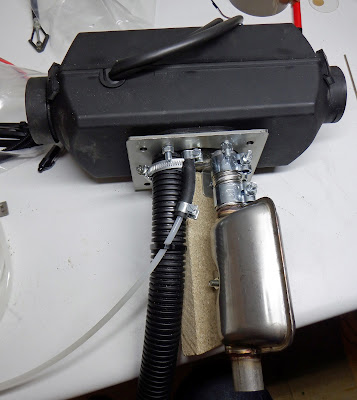 In retrospect, having seen this mounted in the boat I, would have spent a bit more time building a frame that would have allowed the silencer to be mounted horizontally but still close in, that would have given a better lead to the exhaust outlet.
I'm now waiting for some decent weather to go down and start the installation.
Continued here.
Posted by John Lashbrook at 1:09 PM