Round GB Anchorages. The Solent to Lands End

Be sure to check out Reeds  and / or the appropriate pilots for more detailed information and alternates, this is just an overview of likely candidates, but I have been to all of them. I am generally only concerning myself with anchorages as harbours and marinas are well covered in Reeds.

To see my recent visits to each anchorage check out the "Labels" the panel to the right.

The Solent is mainly a marina based sailing centre but on calm days you will find boats at anchor all over, but take care many areas, particularly on the eastern side, are foul with old and new cables and they crop up all over so be sure to check the chart. I'll just cover the 3 most useful "official" anchorages.

Is useful leaving to the east in westerly winds but can be exposed to surge, take care to be make sure you are in the right place and remember that the conveniently situated Bembridge lifeboat is forever rescuing yachts and motor boats from Bembridge ledge. Many will prefer to use one of the three marinas just inside Portsmouth Harbour (check out the rules, you must use the small craft channel and monitor QHM on channel 11) or.....

Is a very popular anchorage for lunch and can get very busy when the weather is good but it usually gets quieter overnight although jet skies can be an annoyance until dark. The anchorage is sheltered from winds with south in them and has good holding but is subject to wake from shipping and is quite shallow, especially at springs, its fairly flat but do a circuit of the swinging area and reduce to soundings. When arriving in the area late or on an ebb tide I fsometimes go here for a nights sleep before going onto my trot mooring on the Hamble which, single handed, I need to have slack-ish water on the flood.

Tucked in behind Hurst point this anchorage is sheltered from the prevailing winds and out of the worst of the tide. It is a useful stopping off point to wait for the tide when heading west or, if coming into the Solent and you just sneak through Hurst narrows on the last of the flood and don't fancy battling the tide up the Solent.

A far better passage anchorage than nearby Swanage where the holding is iffy (thin sand and mud over rock), It is very popular as a passage anchorage, for day sailors from Poole and weekenders from the Solent but there is plenty of room. The downside is speed boats and jet skies until dusk. There is a newly established (2021/2), currently voluntary no anchor zone to protect seagrass beds and the Sea Horses that live there, this may become mandatory if the voluntary status does not work. A few eco moorings are available free of charge.
Watch out for strong tides off Handfast Point on the Ebb and over-falls off  Peveril Point and Durlston Head.

A very useful anchorage if the tides are right to use the inshore route around Portland Bill but it is quite a long diversion if you have to use the offshore route then skirt the Shambles that in practical terms can only be done with a favourable tide, even then it can be quite "interesting, especially if a fog comes in" which has happened to me more than once. Good Holding but watch out for a few solitary mooring buoys that are spreading out from the traditional mooring areas and boats without riding lights that may be on them.
Visited many times, check "labels" on the right panel.

Both are only tenable in calm weather. Beer does get some shelter from south westerlies and is the better anchorage. Lyme has some buoys but they will be bumpy in any sea.

In a westerly wind there are plenty of anchorages just south of Tor Bay, Antseys Cove is my favourite.
Within Tor Bay the best bet is Brixham but both anchorages there get crowded and may be full.

Again plenty of places to anchor in moderate westerlies, almost all the way from Pilchard Cove (which if the wind dies may be the easiest to get to) to Hallsands but the later is much preferred if the wind is stronger or there is any sea running, I have laid there with reasonable comfort in a force 6 westerly. Look out for pots and an eddy in the current that can be a little confusing when deciding which way to lay out the anchor, check one of the pot buoys.

The first anchorage west of Portland sheltered from easterly winds but is likely to be uncomfortable if there is any remaining waves coming in from the south or west. Also, I suspect it would be uncomfortable if there is a particularly large swell coming from the SE so be prepared to move on the extra 13 or 14 miles to Jennycliff bay - crossing Salcombe Bar may not be an option with a SE swell.

There are several anchorages in and around Plymouth, the most convenient are Cawsand or in easterly winds Jennycliff Bay.

Shelter from easterly winds are again problematic, but there are some anchorages.

A large anchorage exposed to the south but well protected from the north and east, its especially useful if Fowey is crowded, as it usually is during the summer. Good bathing beaches.

St Mawes, the Fal and The Truro River.

Most of the time St Mawes will serve well although the village does get crowded and noisy in high summer. Keep well clear of the ferry route (not quite what is shown on the charts), the ferry drivers appear to take delight in passing close by at speed. Also keep clear of the sailing club start line just off the harbour.
The Fal has many "hurricane holes", in really serious weather one of the pontoons up the Truro River is secure as it gets but take care passing Turnaware Bar and Maggoty Bank.
If anchoring up river, especially at spring tides, ensure that the length of chain required at high tide will not let you swing onto a bank at low tide see my 2022 post "Stuck in the Truro river" With a good outboard Truro is within range for shopping. from c Maggoty Bank,

A good anchorage with offshore winds and reasonably protected from the E and often the south east when the anchorage off of Newlyn would be bad news. 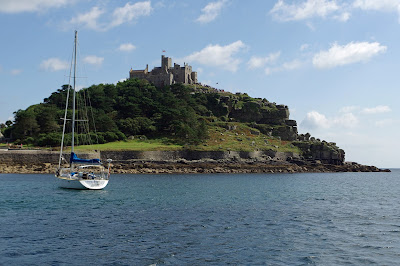 Anchorages with good holding in offshore winds with plenty of services in the town including an excellent cheese and charcuterie shop with a few other things and a good Chinese takeaway. There are a few pontoon berths in the harbour (no animals allowed) which are more convenient for shopping, fishing boats come and go, it does smell a bit and if on the seaward side of the central pontoon you will often end up with three boats in a space designed for two. But I quite like it there.
At low tide the water is very shallow heading to the inside berths, drawing 1.7m I have been aground when well inside the marker buoys, soft mud over rock.
If spending more than a night or two, consider a night in the harbour for shopping and showers and anchoring off or nearby for the rest. If coming into the harbour in the dinghy use the beach to land, the pontoon has a security gate.
There is an anchorage off of Mousehole just south of Newlyn but keep well clear of the route into the harbour and set a low level anchor light, locals tell me that fishermen have been known to crash into anchored yachts.
Click here for anchorages from Lands End to Browns Bay, NI.