Stage one of my July trip, Hamble to Plymouth

Like the season, this trip started late, this time delayed from Saturday by the weather with gales and severe gales in the channel, I eventually got away on Monday, but even that was delayed as the best time to leave was at the end of the high tide "stand" on the Hamble at 03:00 to take the last of the ebb down the Solent, but it was still quite windy so I left it until 08:00, the still brisk wind would enable me to make reasonable progress against the adverse 2 – 3 knot tide by keeping to the shallows and not having to tack to arrive at Hurst as the tide turned favourable. This almost went to plan, I almost made it on one tack from Calshot to Hurst but, a little help was needed from the engine for 10 or 15 minutes to clear "Sconce" buoy without tacking.

I passed the Needles at about 13:00 and after avoiding the southern part of the Shambles bank headed for a point well off Portland to avoid the race and almost certain rough seas closer in, especially with the wind against tide.

With the ebbing spring tide quick progress was made on a very close fetch until just east of the Bill when the tide turned reducing the apparent wind over the sea from 15 to 11 knots or less and it was very slow progress for 6 hours with the wind shifting and dropping at times and coming from the west, just the direction I was trying to sail.

Then we were off again with the wind strengthening but variable in direction between west and north west until 15 miles short of Start Point when it almost disappeared and I missed the tidal gate. Again fighting an adverse tide with little wind on the nose it took about 8 hours to get the 15 miles to south of the point, helped for the last couple of hours by a rapidly increasing wind which made the passage past Salcombe, Bolt Head and particularly Bolt Tail very uncomfortable with a strong wind against the tide.

The final section from there, past The Mew Stone guarding the approach to Plymouth to anchor in Cawsand bay was very hard work with winds well over 20 Knots (F6) at times and a difficult sea  fortunately Sancerre is pretty good at getting over the waves under autopilot or wind vane steering without the need for manual intervention.

I sailed 145 nautical miles over the ground in 35 hours.

Almost the whole trip from the Shambles bank was done with wind vane doing the steering rather than autopilot which was good news as the wind sensor used by the autopilot when sailing kept cutting out, I finally figured out the immediate reason – lots of canned food in the next locker to the radio link transceiver that connects the network to the sensor at the top of the mast. They were not in line between the 2 points but clearly affected the radio link, after I re-stowed the tins the link only failed once, hopefully moving some tools from the same locker as the unit will fully solve the problem. [Unfortunately things got worse later in the cruise and the wind sensor failed altogether coming down the east coast].

If the forecast, which shows poor visibility and adverse winds up to Force 6 tomorrow, holds the plan is to move on, probably to St Mawes, on Friday when the wind will be favourable, meet up with some fellow Achilles boat owners on Saturday when the winds are due to be very light or non-existent and push on from there on Sunday. If the weather is a little better than forecast tomorrow I might take advantage of any window to stage through Fowey.

Slide show all of my pictures from Hamble to Plymouth. Page through by clicking the arrows or click in the centre of the pic to view from Flickr in a new window or full screen: 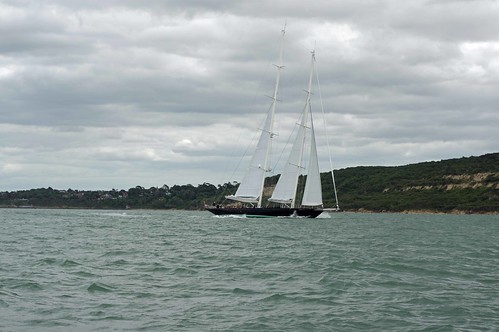 Posted by John Lashbrook at 8:15 PM

Email ThisBlogThis!Share to TwitterShare to FacebookShare to Pinterest
Labels: 2020 Round GB, Cawsand, Plymouth