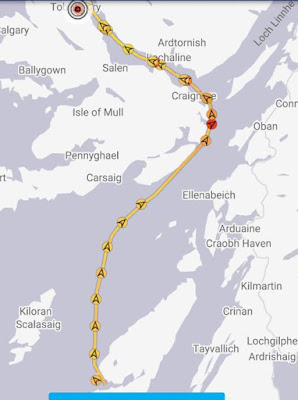 I had hoped to head north to Mull then to Tobermory west-about via Iona at the western end of the island and Staffa (Fingle’s Cave) but strong southerly winds would make most of the anchorages untenable and part of the trip potentially dangerous so plan “B” was to make for Tobermory going east of Mull, through the sound. Update: I made Iona and Staff during my 2021 anti clockwise round GB trip.

My pre-planned alternate was to go via Lock Spelve on the south-eastern side of Mull which is a safe anchorage but very isolated and with a spell of bad weather forecast I decided, if possible, to get into the Sound of Mull on the first day where there are some good anchorages a couple of which have shops etc. within dinghy reach.

The trip fell into three parts, a boring and initially cool trip motoring north past Colonsay towards the south side of Mull avoiding the “Great Race” to the east that stretches several miles west of Corryvrecken, as I drew close some wind filled in and it was a pleasant sail along the coast past Loch Spelve to Lock Dun by which time I was making 5 – 6 knots running using the cruising chute flown from the pole as a spinnaker.

Then things started to get a bit “interesting”, fighting a 2 - 3 knot tide and on the edge of over-falls between Lithmore Island and Mull the wind started to increase and within 2 miles I had gone from running  with the spinnaker to broad reaching with two reefs in the mainsail  and two in the headsail and still making 5 – 6 knots in 20 – 25 knots of wind.

In the Sound the wind was very variable, coming down from the mountains on Mull, one minute it would be 20 knots the next 5 to 10, but I made good time and was approaching the entrance to Tobermory about 5:30 to find a drama unfolding for a yachtsman.

I had heard one side of a conversation with the coastguard and a lifeboat but the high hills had prevented me hearing the other half or seeing the lifeboat on AIS (Automatic Identification System) until I was quite close. A yacht had run aground on the lea shore just south of Tobermory and was being pulled off, with some difficulty by the life boat. At least they had a rising tide which helped.

I went into Tobermory Bay, ahead of the lifeboat and the rescued yacht that was able to move under its own power.

Intending to anchor in the sheltered west side of the southern section of the bay I found mooring buoys had been placed there and in the only space with less than 20 metres of water the bottom was steep to and weed covered and I could not get the anchor to set. The east section had 20 knots of wind blowing through it and a very small space between the shore and a wreck of uncertain position so I gave up and went to the northern part of the bay and picked up a (chargeable) visitors buoy as the anchoring area in that section was temporarily suspended.

At least the showers etc. were available and I was close enough in to row the dinghy in saving fitting the outboard motor. 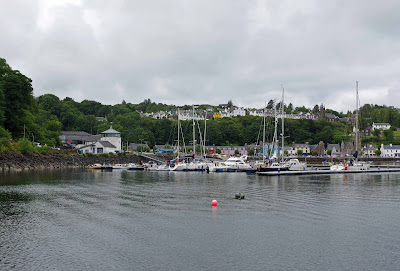 A lazy weekend followed, waiting for strong winds to abate, except for an hour and a half on Sunday spent tying to get weed off the bottom of the boat, accumulated mainly in just 3 weeks on the Hamble despite premium anti-fouling. 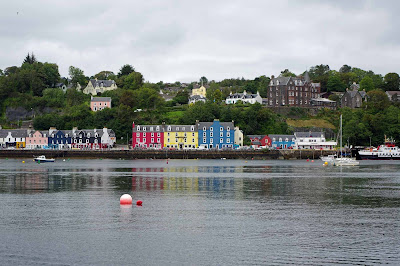 Monday does not look promising at the moment, but there may be a short window to move further north, but Ardnamurchan point has a reputation for rough seas and much of the route is exposed to the Atlantic weather and waves so caution is needed.

Slide show all of my pictures from Loch Talbert to Tobermory. Page through by clicking the arrows or click in the centre of the pic to view from Flickr in a new window or full screen: 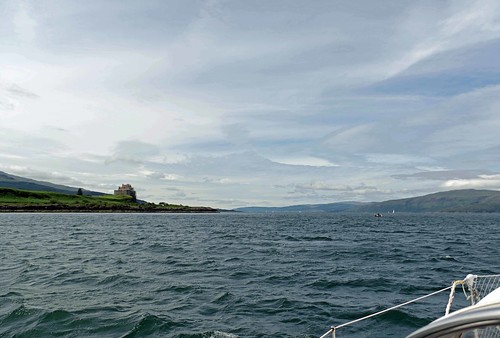 Posted by John Lashbrook at 4:12 PM