Another generally dull overcast day with a few light showers but with a decent wind. I left at six o’clock to get the benefit of some northerly flowing tide across Dublin Bay, progress was good and I was reaching at a decent speed for most of the day.

The wind piped up to 15 knots plus as I approached Dundalk Bay and I started to get a bad feeling about my chosen anchorage on the south side which would give most shelter from the south westerly wind. 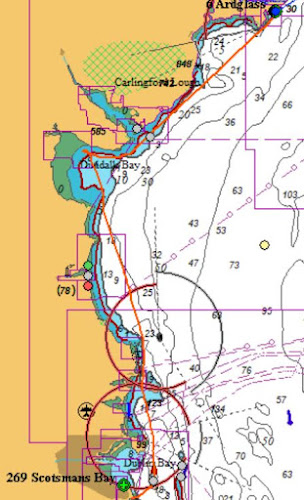 I’m not quite certain why I decided not to anchor there, in theory it looked good with a sandy bottom and good shelter but it is very shallow, as is much of the bay, and the echo sounder was not quite agreeing with the charted depths (the cart is marked "Owing to the age and quality of the source information, some detail on this [area] may not be positioned accurately") so having manoeuvred round a couple of charted shallow areas (c 1m) I started to get cold feet. Also the wind was forecast to veer to the west or north west (again) which could put me on a lea shore sometime during the night.
Update: I would have been a bit more comfortable if I then had the Admiralty Leisure Folio for the area (SC5621), sheet 3 has Dundalk Bay with much more detail than the Imray chart or the plotter.

The question was, what to do instead? Ardglass was 5 hours away and has a narrow entrance to the marina so I discounted that, which left the choice of the exposed northern part of Dundalk Bay or going into Carlingford.

I set a course for somewhere in between and consulted the Pilot and chart, I could easily get into Carlingford and there are a few places to anchor but I could have difficulty getting out against the tide early next morning so I went to have a look at the north western side of Dundalk bay, tracking along the shore as far west as it seemed sensible to go in the very extensive shoal water.

I was right on low water so calculation was easy and I knew depths would only improve with time and if I did hit an uncharted mound I would float off, just in case I went slowly under engine and turned when I reached four metres, giving me a couple of metres and a bit in hand.

The wind was now blowing 20 knots but as I moved south and the fetch reduced, things got a little calmer and I eventually dropped the hook just short of the narrow drying channel into Dundalk in 3.6m. With 30 metres of chain out the boat was certainly quite lively, occasionally pitching quite badly but not rolling. I left the chart plotters anchor alarm on for a while but having got a good transit turned that off after an hour or so.

I turned in with the wind still quite strong and gusting past 20 knots but knowing that the anchor was holding, I had a mile of water behind me and if something went wrong when the wind veered I would then have miles of sea room to leaward.

I woke in the morning to a F3 westerly and relative calm, wanting to get to Ardglass before the shops shut I was away by 6:30, although that was not without incident – the anchor (a 10Kg Delta) had, under the rigors of holding the boat the previous evening, buried itself so deeply that the windlass would not shift it.

With the chain vertical I engaged the chain stopper and pulled in a link or three whenever the opportunity occurred and eventually the boats motion freed the anchor before I had to resort to the engine or wait for the tide to rise significantly. Worrying at the time because although I thought I knew what had happened  I might have fouled something but reassuring that the anchor is worth its “high holding power” rating.

Sailing was pleasant until approaching Dundrum bay when the wind dropped so I bit the bullet and motored the last 12 miles or so. Arriving at Ardglass, which I had last seen in 1972 when I was stationed nearby with the RAF, at 12:40. It was then nice to meet up with Liam, a 30 year Achilles 24 owner for a quick chat late in the afternoon.

Sunday was spent revictualing the boat, laundry, filling up with diesel (by porterage) as the next convenient opportunity on the planned route would likely be Tobermory, and getting the blog up-to-date.  The plan is to move on to a suitable bay north of here before crossing the North channel and making for Islay.

Slide show all of my pictures from Sorrento Bay to Ardglass. Page through by clicking the arrows or click in the centre of the pic to view from Flickr in a new window or full screen: 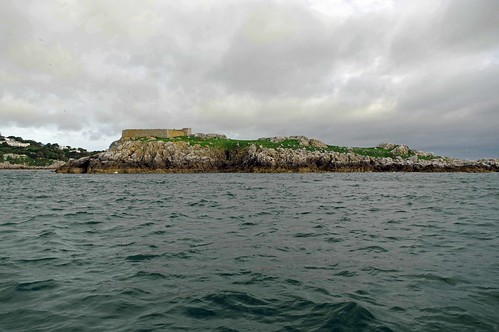 Posted by John Lashbrook at 4:55 PM