From here on right through to Stromness catching weather windows was key and fortunately they generally matched up with tidal gates albeit requiring some early starts.


Finding the weather windows was not easy, the met office inshore forecasts available from the internet, the BBC and transmitted on VHF by the coastguard at regular intervals, are generally pretty good and give guidance for the following 24 hours and the 24 hours after that, within the day a change in the second 12 hours is identified as being “later” but generally that is it, which is often not good enough. Also the areas can be quite large and especially in the Scottish Islands local effects can be very significant.

So I back up the met office information with multiple 3 hourly weather maps, one from the European Centre for Medium Range Forecasting (the ECMWF model), the American government’s General Forecasting System (the GFS) and two from the Australian commercial operation “Predictwind”. These can be downloaded in high resolution over the internet and at 50km or 100 km resolution via satellite, useful when you can’t get a cell phone signal.

Tobermory to Broadford bay presented a particular challenge as the route north of the Isle of Skye requires a passage through the Kyle Rhea a narrow channel where tides run at 8 knots, faster than the boat will go – so it has to be going in the right direction.

A narrow weather window became evident on the 27th although with very light winds it would require motoring most of the way to make the tidal gate but it would position me better for another window in 2 or 3 days. So I left at five in the morning, out of the sound of Mull past the Point of Ardnamurchan, often an uncomfortable area and up past Muck, Eigg and through the Sound of Sleat.

I made the tidal gate at Kyle by less than 45 minutes, getting through at slack water and about 1.5 knots of adverse tide for the last threequarters of a mile.

The best part of this leg was watching Sea Otters fishing, they almost always came up with something to eat, one was 1.7 miles from the nearest shore and several families were taking the benefit of slack water in Kyle Rhea, with an 8 knot tide it would be a long hard swim or walk home if they got the timing wrong.

The whole passage so far had been in dull overcast and chilly weather but now rain showers started. Although I had planned to go as far as Broadford Bay, just in case, I had intended to anchor in a small bay just short of the Skye bridge but on arrival found it littered with mooring buoys so I had to fight my way under the bridge against the tide and increasing wind before heading westward to anchor in Broadford Bay which on the first night was quite comfortable but with the wind coming more from the NW became less so as I waited for force 7 winds to pass by.

Slide show all of my pictures from Tobermory to Broadford Bay. Page through by clicking the arrows or click in the centre of the pic to view from Flickr in a new window or full screen: 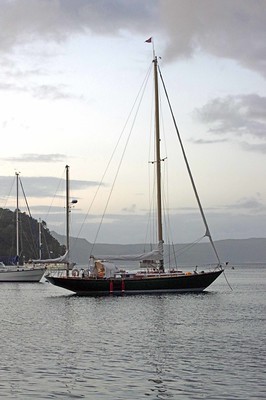 Posted by John Lashbrook at 4:51 PM