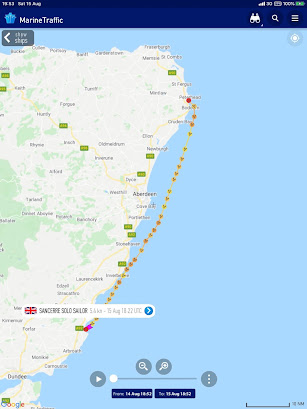 I left Peterhead at 05:50 on Saturday the 15th, still rather short of sleep due to a cramp and varicose veins playing up overnight (I’m still wearing the compression bandage almost 3 days later but they are back under control). It would have been an excellent sail but for the cold and some equipment failure.


When I switched on the electronics the wind instruments failed to work, this happens occasionally when the radio communication to the mast head fails but on this occasion I could not trick it back on. The masthead battery, meant to last 3 – 4 years was replaced during the winter so either it is a duff one, there is a poor connection, or the solar cell is not working well enough.

Sailing manually without the instruments is not a big problem until you get tired, sailors have done that for thousands of years, but it does mean that the autopilot can not be guided by the wind direction which is problematical in variable winds and particularly in strong winds as sailing to a compass bearing could result in the boat being taken “flat aback” or being knocked down by a gust. The solution is to use the wind vane steering – usually preferred in stronger winds when it works best and unlike the autopilot uses no electricity.

Setting that up I found it no longer worked, and I know why. In Stromness I was in the cabin when I heard but iirc did not feel a “bang”, I went on deck and saw a large dinghy with two fishermen in it moving away and they were looking at me. I could not see any damage and as the pontoon stuck out further than the back of the boat so I assumed they had hit that. It would appear I was wrong. I still can’t see any damage, but things don’t look to be in alignment. Hopefully one of the parts has just been twisted in its mounting and by easing the clamps I can re-align, that will need to be down from the dinghy which I will do when the opportunity presents, hopefully when at Lindisfarne.

Fortunately, the wind was a fairly steady force 3 so I could use the autopilot and until Montrose Bay when the wind died, I was able to sail all the way. I anchored in a rather exposed anchorage at the south end of Montrose bay but with light winds and a calm sea I had a good, albeit rather short night as another early start was needed.

Posted by John Lashbrook at 4:38 PM