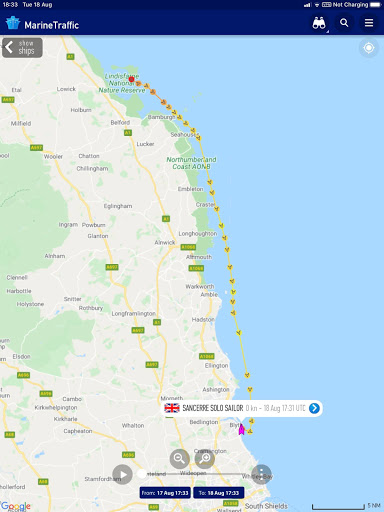 Monday at The Holy Isle was a washout with rain and fog and I stayed on board but there was some excitement in the late afternoon when, after 22 hours on the anchor it started to drag in the strong current through the anchorage. I noticed before the anchor alarms went off but quick work was needed to avoid dragging into the moorings and preferably without using the engine until the anchor was up along with the trip line which could easily get into the propeller where it would hopefully get chopped up by the rope cutter rather than wrapping round the prop, stalling the engine and leaving me without propulsion.


When the anchor came up, I was surprised to find a large car tyre on it with the point of the anchor right through the tyre wall. Fortunately, I was able to get it off fairly quickly and reset the anchor for a peaceful night.

Tuesday dawned with fog banks coming through and with the forecast models coming into agreement for the next few days predicting strong winds from the south, south east and southwest at various times. Although there would be several good days for sailing but generally with headwinds and more importantly on-shore winds which would make planned anchorages (and Lindisfarne) untenable. Gales would also come through at some time between Thursday and Saturday night.

I therefore decided to move immediately to Blyth, the best shelter available in the area to await better weather. In theory, except very close to spring tides, there is enough water over the “bar” into the anchorage for Sancerre to pass at all states of the tide provided the sea is reasonably calm but to be on the safe side I left at 10:30, an hour after low tide for an extra half metre of water and to be going into the tide minimising the speed over the ground making navigation easier.

Shortly after clearing the island and approaches the fog became significantly thicker and visibility varied from about 100 yards to 300 until I was well past Seahouses. The F3 wind was on the nose so I motored through the Inner Sound seeing Bamburgh Castle and the Farne Islands only on radar, keeping speed down to 4 knots to give more time to analyse what was going on.


I also saw a lot of small fishing boats on radar (but not on AIS), in a half hour period I tracked 7 different boats classified by the radar track as “dangerous”, changed course twice to avoid collision and saw only one boat at a range of 200 feet as we passed. The visibility improved to a half mile or more as I passed Newton Point and with the wind off the bow but not far enough off to make the course but I hoisted the mainsail and motor sailed at good speed – beating along the coast would have meant an arrival in the dark in a forecast blustery wind with rain.

When I turned the next corner I was able to sail but frustratingly the wind changed after about half an hour and it was back to motor sailing. The rainstorms arrived an hour out from Blyth and the wind started to increase. Given immediate clearance to enter the harbour I was alongside at 17:25, 34 miles in 7 hours.

Ironically the warmest weather I have had since leaving St Ives has been the first couple of days in Blyth, Wednesday the winds were light so I would not have got far sailing, but the weather overnight was very wet and windy. Today (Tuesday) there has been lots of warm sunshine with a strong south easterly wind (F4-6) increasing to F7 or Gale 8 later, Saturday is likely to be much the same but there appears to be a good chance of favourable winds for a few days from Sunday. We shall see.

Posted by John Lashbrook at 4:09 PM

Email ThisBlogThis!Share to TwitterShare to FacebookShare to Pinterest
Labels: 2020 Round GB, Blyth