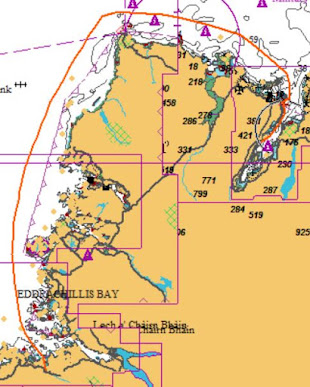 With strong winds coming through in bands it was another difficult call on the weather and with Cape Wrath being notorious for big seas I was expecting to be stuck in Loch Nedd for a day or two but on Friday morning (the 31st) the weather maps showed a potential chance as a front moved through giving calmer conditions with continuing offshore winds keeping the seas calm.
This was not reflected in the met office forecasts which covered a much larger area so I phoned a forecaster at weatherweb.net to review and that confirmed my suspicions and even better the wind should likely swing to the southwest early in the evening (we estimated 17:00 or a bit later at Cape Wrath) which would help me to move east  towards Lock Eriboll. Further good news was that the tides should work and be favourable all the way so I quickly got ready and left at 10:00.
And things worked out very well, as on the previous day I started off with just the reefed genoa but as the wind dropped I progressively moved to the full genoa and mainsail, approaching Cape Wrath I could have put up the cruising chute but decided not to as squally showers on the approaching front were a distinct possibility.
Three miles short of the Cape the wind ran out and then veered 90 degrees in 20 minutes and perking up to F3, however it kept dying so I used the engine on occasion to reach the entrance of Loch Eriboll a little before 6:30.
My planned anchorage was on the western side of the entrance, the pilot mentioned that mooring buoys restricted swinging room but that was an understatement, additional mooring buoys now in place would have made it unusable before a lot of pot buoys(?) were put down so I had to abandon that and moved further into the loch to Port Portnancon, another small anchorage on the west side. When I arrived I found a new looking, unused mooring buoy in “position A”. Other sailors are reporting this sort of thing a lot and there is a growing belief that buoys are being put down to keep visiting yachtsmen away to preserve the privacy of house owners.
I anchored as close as sensible to the mooring buoy in what appeared to be good holding but very close to the shore so set the anchor alarm with very tight parameters. As it happened that proved unnecessary because just after the tide turned I noticed the anchor was dragging and I got the engine running just as the alarm went off. I had anchored in thick Kelp which held against the engine when tested but let go as the boat swung. Fortunately the windlass was powerful enough to haul it all up. Parts of the plants reached back to the middle of the boat and I doubt I could have lifted it by hand. Fortunately there was another anchorage on the eastern shore and I moved there and spend a quite night.
48 miles in eleven and a half hours plus moving the anchorage.
Slide show all of my pictures from Loch Nedd to Loch Eribol. Page through by clicking the arrows or click in the centre of the pic to view from Flickr in a new window or full screen:

Posted by John Lashbrook at 4:34 PM