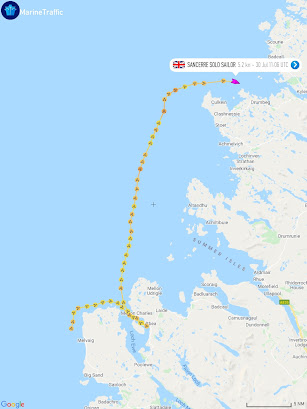 It was a close call on the weather with rough water often occurring at Stoerhead and strong (Force 6) winds forecasted early on moderating to F4 -5. But the winds were from the east or southeast so calm seas with the offshore wind and comfortably off the wind for most of the way so off I set, again with an early, 04:40, start.

Once clear of the Loch I was soon making 5 – 5.5 knots under a double reefed headsail with no mainsail.  The wind was up and down for a while until approaching Stoerhead it was down to a modest F3 with a comfortable sea.

Things changed quite quickly as I rounded the headland with quite a big sea coming from the north, left over from very strong winds a day or two earlier to the north east. On top of that were waves coming out of the lochs from what was now an easterly force 5 making for a very nasty sea. Not being far from my planned destination I switched to the engine and had a very uncomfortable ride as I past Oldany Island.

I had planned to anchor in Loch Drombaig a small loch behind multiple islands with an entrance about a hundred yards wide, it did not take long to decide that was not a good idea with seas breaking all round so I carried on to Loch Nedd a narrow lock but with a safe entrance and with good shelter.
33 miles in ten and a half hours.

Slide show all of my pictures from Loch Ewe to Loch Nedd. Page through by clicking the arrows or click in the centre of the pic to view from Flickr in a new window or full screen:

Posted by John Lashbrook at 3:10 PM