On Tuesday morning the wind was still adverse but rather better than forecast with mist largely gone by 11:00 and no rain forecast until late afternoon so I decided to move south to shorten Wednesdays trip and to make it easier to time the run to Cantic head – critical for the smoothest trip out of the Pentland Firth and round Duncansby head and to allow a later start which would hopefully avoid rain forecast for Wednesday morning. 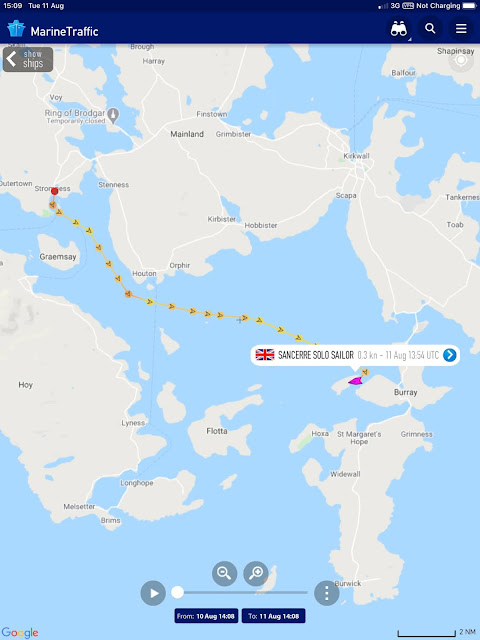 So I moved to Hunda Sound between Burray and Hunda islands, cutting short a site seeing trip along the eastern side of Scarpa Flow short as rain approached but then bypassed me, for the moment.

As I had dinner an inquisitive otter came to look me over but when I moved there was a "splosh" and I watched it swim away under water.

Slide show all of my pictures from Stromness to Hunda Sound. Page through by clicking the arrows or click in the centre of the pic to view from Flickr in a new window or full screen:

3 hours and 14 miles bringing the total over the ground to 999 miles.

The weather was rather strange that evening and in a little over an hour the wind went from SE 12 knots to no wind and a slight mist to fog with visibility 1 – 200 yards and with the wind returning from the SE at 15-20 knots. Then came the thunderstorms, always a nervous time when you are on a boat with your metal mast the highest thing around for some distance. The portable electronics all went into the oven or grill which makes a good “Faraday Cage” to protect them, fortunately I had already had dinner. 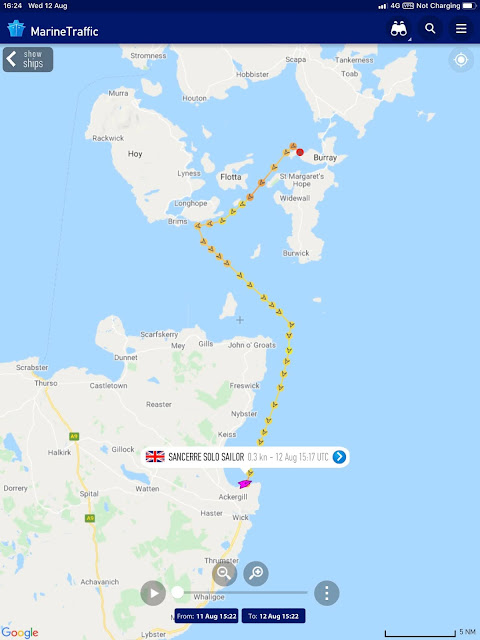 My plan for the morning almost worked with rain stopping at 7:30 after dropping an inch overnight, But it started again shortly after as I was pulling up the anchor (or rather the windlass was) so I set off with poor visibility in mist and fog banks and rain and neither cleared until I approached Cantic Head.

My route out of the Pentland Firth was described as “Sneaky” and "Champaign Sailing" on the owners forum, perhaps it was, but it is the route recommended in the Pilot, passing Cantic head to take the last of the west bound tide to around Aith Hope then head out into the Firth passing south of Soma and north of Stroma both of which have dangerous races around them. With strong tides getting the timing wrong could result in being swept into the Merry Men or more likely getting set on to Soma, care is still required as tides of 9 knots (at springs) run in the centre of the passage south east past Duncansby head to the south and the Pentland Skerries to the north and 16 knots has been reported close to the Skerries.

I had about the most benign conditions possible, one day before neap (weakest) tides, no wind and small waves, initially from the west then from the east. With spot on timing I passed through at the optimal time, just at and after slack water so that although the current never dropped below 1 knot it did not reach more then 3 or 4. The clouds then cleared and for a few hours it was the warmest it had been since I rounded Land's End. With little wind the seas had quietened enough to anchor at Sinclair’s Bay north of Noss Head and Wick.

32 miles in six and a half hours mainly motoring or motor sailing but with some sailing towards the end.

Slide show all of my pictures from Stromness to Hunda Sound. Page through by clicking the arrows or click in the centre of the pic to view from Flickr in a new window or full screen: 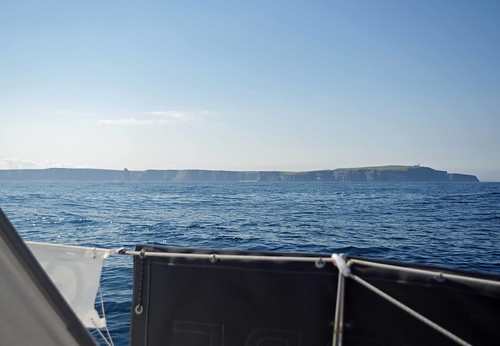 Posted by John Lashbrook at 4:45 PM