The weather remained damp and chilly and with strong winds forecast I decided against my planned stop off in Lochs Torridon and Diabaig and headed straight for Loch Ewe, once a fairly important naval anchorage which still has a NATO refuelling pier for warships. This move would also position me well for possible weather windows to get to Orkney.

Tide was less important for this leg but it was another early start at 05:10 to make quite a long hop with some uncertainty about the wind.

The weather went from nothing to NW F5 and back to westerly F4 in less than an hour and stayed that way until well into Loch Ewe when it dropped away to nothing.

I was largely past the BUTEC testing range before trials started and was disappointed not to see at least the periscope of the submarine reported to be about.
I anchored at Aultbea, further into the Loch than planned at the outer ones looked rather exposed and quite small.

Slide show all of my pictures from Broadford Bay to Loch Ewe. Page through by clicking the arrows or click in the centre of the pic to view from Flickr in a new window or full screen: 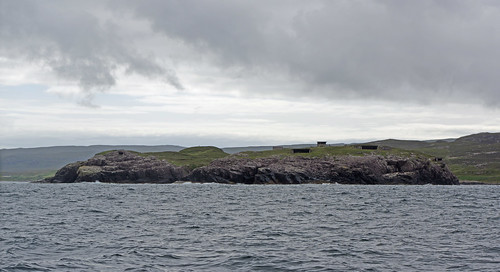 Posted by John Lashbrook at 1:48 PM