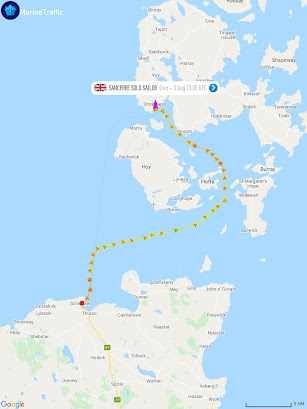 I was too tired to restart the next day as the tide required either an early start or a late finish even if I anchored in the southern part of Scarpa Flow. On Monday the 3rd, with the tide an hour later I slipped at 06:47 and went back to where I had left off on Saturday as this was the safest route to clear Dunnet Head and other hazards, the wind was light so I was under engine and making good progress until about 2 miles off Scabster when the sea got up and became surprisingly rough and uncomfortable so I slowed to between 3 and 4 knots (which the plan allowed for) and a little late turned east and even with a light following wind a seriously uncomfortable ride east with the easterly tide increasing to about 2 knots.

As I came to the “Merry Men” the tide increased to over 5 knots and the seas miraculously calmed. The pilot notes that east of the Merry Men the seas would be calm but now, with the east going tide, it calmed as I hit the western side of the charted position. It was then a quick and pleasant passage into Scarpa Flow under sail. I even had a sight of the local Killer Whale pod, of course by the time I had got the camera from below they were too far off to photograph.
It was a pleasant sail past Flotta but the wind then blew up to Force 6 and I was not going to weather a  dangerous rock formation with the intriguing name of the “Barrel of Butter” so I started to motor sail and then motor up to Stromness.
Then the next drama unfolded, manoeuvring to get onto the marina pontoon I put the engine into reverse to do what was in effect a 3 point turn, nothing happened and nothing happened when I put it back into forward. Being blown about by a brisk wind I had the anchor out in record time after missing a small moored boat by inches (It was only small so I could have fended off) and came to a halt in an indicated 2 metres of water, the boat draws 1.7, about a hundred yards from the pontoon. So with a falling tide it was another tow, this time from a local power boat owned by the duty volunteer marina “berth master”.
The gear linkage was OK and a quick look under the boat showed the propeller was missing!
Slide show all of my pictures in Stromness. Page through by clicking the arrows or click in the centre of the pic to view from Flickr in a new window or full screen: 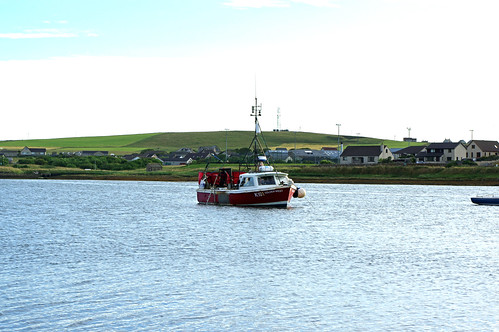 Posted by John Lashbrook at 2:09 PM