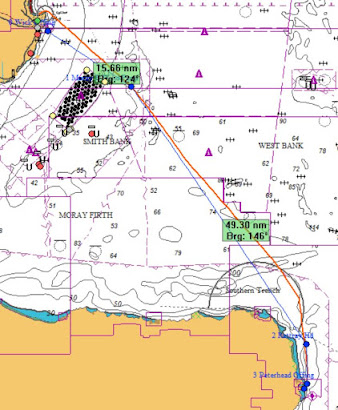 I went early to bed with the alarm set for 04:00 to try and get to Peterhead in daylight and to take the last of a favourable wind but I was woken shortly after as the wind and sea increased and although safe enough the un-forecast force 4 – 5 north westerly wind was rather to good to miss so I weight anchor at 23:50 and headed east past Noss Head. And straight into fog.


I was very glad for GPS, radar and particularly the AIS (Automatic Identification System – showing the position of large ships to me and me to them) as I passed close by the Beatrice Windfarm where there were a lot of floodlights whose glare in the fog obscured the lights on the navigation buoys, the same happened on the new field to the east but daylight was breaking and the fog banks were becoming thinner so it was rather less tense.

My most worrying encounter overnight was with a very large oil tanker going south at 1 knot which I was passing in front of when she started to make a turn towards me, was she turning to avoid me? Unlikely as she could have called me by name or blind on channel 16 if my AIS was not transmitting properly. Eventually things became clear as she completed a 180 degree turn and went north making little speed over the ground and was clearly just doing “circuits” to waste time.

I got to Peterhead just after 17:00 having done the whole trip just under headsail, often reefed. That was 78 miles in 17 hours for an average speed of just over 4.5 knots, I could have gone faster but a difficult sea was uncomfortable at that speed and would have been more so with more sail set.

It was also a very cold trip and on this leg and most of the next two I was wearing winter gear including fleece lined trousers, two fleeces, gloves and full wet weather gear despite the lack of rain for which I was duly grateful. In August!

Having had little sleep and with a couple of long legs to follow, I stayed at Peterhead for a day and was able to get a few fresh items of stores from a small convenience store.

Slide show all of my pictures from Sinclairs Bay to Peterhead. Page through by clicking the arrows or click in the centre of the pic to view from Flickr in a new window or full screen: 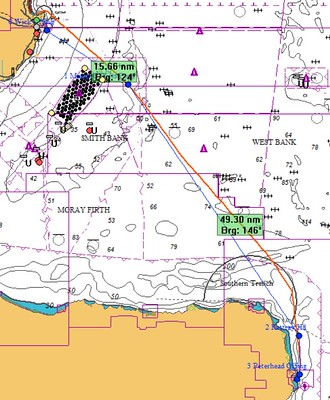 Posted by John Lashbrook at 4:31 PM