I ended deciding on the long and winding road out rather than the route through St Helen's Gap (see previous post), the main reason for this was that the sea was very calm so that some rocks on the right hand side of the channel that were just under water were not visible (even very small waves would have showed them) so I would have been relying on the GPS and eyeballing the more distant rocks to find the channel. A very calm sea also gives more clearance over submerged rocks on the route through the islands. 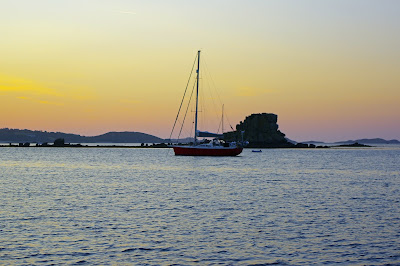 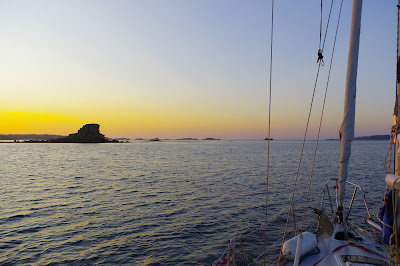 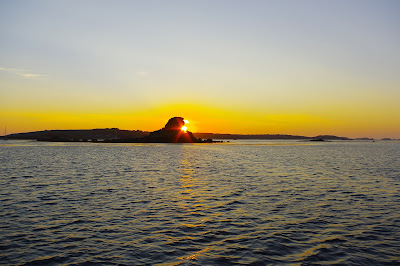 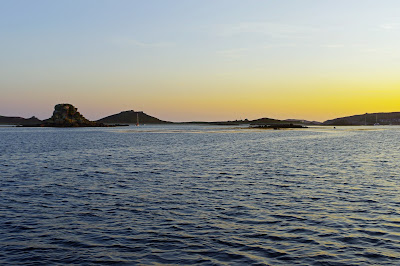 Slide show of all my pictures from St Marys to St Helens Pool, page through by clicking the arrows or click in the centre of the pic to view from Flickr in a new window or full screen: 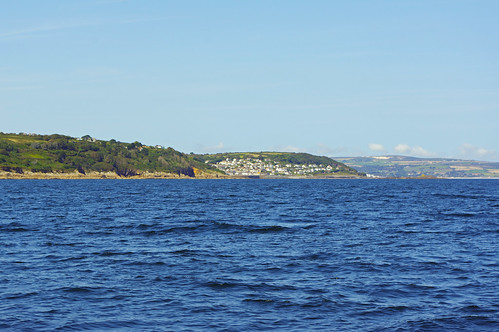 Leaving Crow sound I had a decent wind from the ENE although progress was slow with rather broken seas caused by the strong tide against the wind. Clearing the tide race I speeded up and was making reasonable progress hard on the wind until I switched on the engine to cross the Traffic Separation scheme (this one has to be crossed with the boat pointed east and I could not make that under sail). Unfortunately the wind died as I crossed so the engine stayed on until I was almost south of Longships, thereafter the wind went right round the clock ending back at Northerly as I came into Mounts Bay. With wind forecast to be E or NE for several days and Newlyn was likely to be full so I went back to St Michael's Mount for the night.
Slide show of the RNLI lifeguard at Marazion, aided by some paddle boarders rescuing a family being blown out to sea in an inflatable. Page through by clicking the arrows or click in the centre of the pic to view from Flickr in a new window or full screen:
For once one of my cunning plans worked, there is limited capacity at Newlyn and access to Penzance is limited to close to HW, with tides as they were anyone leaving Newlyn east or west would leave as early as possible, so I arrived outside at 07:00 and there was a choice of berths. It was just as well I did that because by early evening boats were double parked with 3 boats in most bays which is a bit of a squeeze. I had an 11 metre boat rafted up on me (Sancerre is 9 metres) and the smallish boat on the other side of the pontoon finger had an even bigger one.
Now (Wednesday) on my second day here and having done my visiting I may be able to move out tomorrow back to St Michael's Mount for the night to save a days berthing charges, then go round the Lizard to St Mawes on Friday and onto Fowey on Saturday before becoming weather bound again, this time with winds from the south or south west.
The Cheese shop and Chinese takeaway in Newlyn are both to be recommended, Camping Gaz at the Chandlery however was rather expensive.
38 miles over the ground to St Michael's Mount in 9.5 hours.
Click here for Newlyn / Penlee lifeboat day.
Posted by John Lashbrook at 2:19 PM