It was a rather slow trip given the F5 easterly wind, caused by almost head seas on the long port tack, I went 2 knots quicker on starboard. It was a quick finish from the Manacles despite the wind dropping. 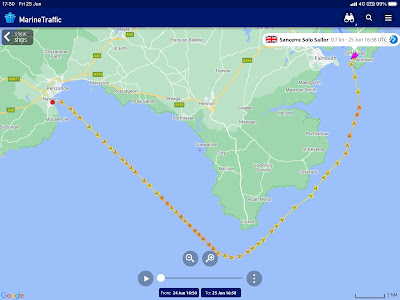 40 miles in ten and a quarter hours.
I left early preferring a foul tide to Dodman or further and wind with the tide to a later departure with wind against tide and rougher seas, I have that T shirt along this bit of coast, even so an old topsail schooner c 70ft on the deck was pitching so much off St Anthony Head that the entire bowsprit was under water at times. 😮.It was reasonably quite in Fowey on Saturday, then a cruise ship turned up at 06:00 on Sunday. It was very busy when I went ashore with no one masked so I didn't bother looking for somewhere to eat, just had a shower at the yacht club, did a bit of grocery shopping, bought a rather good pasty from a shop I remember from the 70's and came back to the boat. 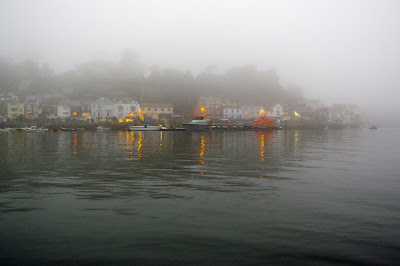 24 miles in 6 hours.
Click here for the leg to Salcombe.

Posted by John Lashbrook at 9:23 AM