I found and fixed all the fuel leaks in the diesel pipe work that looks to have been bodged on installation of the latest tank and/or the now removed oil heating, although the fuel return (not a large volume on a Yanmar) is going to a fuel can rather than the tank. It had been inserted into the breather pipe and that leaked whenever the tank was filled, made worse by the original breather pipe terminating over a foot below the filler, the new longer one goes higher to the breather fitting that had clearly not been used for years.

However the rubber bladder tank is getting old, probably having been installed in 1997 when the single cylinder engine was replaced by the two cylinder which required the tank to be moved. The bladder is 100 litres but only takes about 50 litres due to the size of the compartment under the port locker floor, that model tank is now out of production and finding a suitably sized replacement is problematic.

Whilst a bladder has some advantages, primarily fitting into odd spaces and reducing the risk of fuel bug because there is minimal air over the fuel, it also has a number of disadvantages including a greater chance of leakage or coming adrift (the later risk I have limited with a strong back over) and an inability to measure how much fuel is in the tank (I keep a detailed fuel log which has worked so far but it does require the tank to be filled right to the top every now and again to confirm the calculations) because of these problems and probably others, stand alone fuel bladders are banned under the racing "Special regulations".

So I have decided to replace the bladder with a stainless tank that will sit on top of the locker floor. This will reduce the available space for fuel in cans but this is balanced by having almost 20 litres more capacity in the tank. I can also build a storage bin above it for smaller items such as grease, engine oil, and cleaning materials which will declutter other areas.

I am having to have the tank specially made so that it is narrow enough to fit through the hatch but the premium was only about £30 probably as I was careful to specify the tank with the same length and depth as a coupe of standard tanks. It is deep for it's capacity which will make level readings more accurate. With the tank higher I will also be able to move the primary fuel filter from the engine compartment where it is VERY difficult to access and the fuel cock from under the locker floor.  A fuel priming bulb will help to bleed the system and a level sensor will feed the NMEA2000 network so that fuel level will be available on 3 separate instruments, the lap top and ipads, I will also be able to set an independent alarm on each instrument to warn when it is time to transfer fuel from the cans (the fuller the tank the better, or if it drops to a seriously low level.

That leaves a gap under the floor. The boards are contaminated with diesel and water and are perhaps a bit light weight, so I will probably replace them with epoxy covered marine ply after detailed inspection when I get them out. After cleaning the space I will move the water tank from the starboard side of the forepeak, reducing the weight forward and helping to counter act the slight list to starboard caused by my batteries, water and food storage currently to starboard. The water pump will have to be moved but that is not a big job and will free up storage space under a bunk and reduce the piping run by 6 or 7 metres. I have the option of putting a second water tank forward using the existing pipe work but at least for the moment I prefer to have additional water in containers and bottles nearer the centre of the boat, its not a big deal to decant some from containers to the tank for the convenience of having it "on tap".

This is the 1st iteration of the design, the biggest issue is access through a narrow hatch with the floor out of reach without major contortions and even then some parts can’t be reached so improvisation and careful design will be needed. Most of the material and components are on order but lead times are such that substantive work can’t start until early October but hopefully I can do some preparatory work done before the weather gets cold.

Sancerre had an electric cool box fitted outboard of the sink unit and aft of the cooker, it was not working when I bought the boat and I suspect for a long time before that. It is not reparable or easily replaceable and wastes a lot of space. 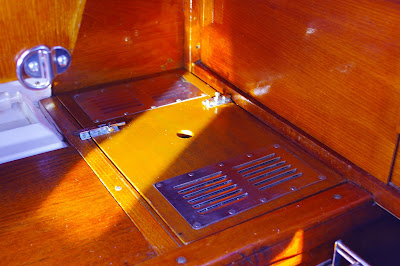 As part of the fuel and water tank project and to make the water filter easier to change I need to remodel the storage under the sink unit and access from the front is likely to make fitting the tanks easier so I'll be ripping out the cool box and will build a larger bin in ply (with some insulation), and a lift out basket if I can find one to make getting items out easier. That is likely to be a long awkward job because of poor access, but not expensive. I'll also be able to tidy up the electrical wiring between it and the locker with the fuel tank and remove some that is redundant.
Up date 22nd October:
Job done! And lots more storage space:
Posted by John Lashbrook at 4:50 PM