The weather forecast indicated that this was likely to be a frustrating day, and so it proved, but I did not expect the wind to start off from the NE then veer right round the compass back to NE before settling down at the forecast westerlies or never to get to the F4 mentioned in the forecast. Nor did I expect fog, and I hoped the "possible thundery showers" would be further west and not involve lightening, at least near me.
I left at 04:15 for the best tides past Prawl and Start Points and out into Lyme bay. Shortly after dawn what appeared to be a light shower appeared in the SE (the wind was NE) rather than pass clear it came very close, growing in intensity. Then the lightening started, fortunately not that close and all I got was rain. Another system followed at 10:00 but with less lightening.
The display shown above shows a thunderstorm from 2 to 6 miles ahead (left, the bright white circle is 8 NM out) and another close aboard (right, white circle at 0.75 NM), displayed on an iPad replicating the chart plotter display. The doppler radar shows things with relative movement towards the boat in red, moving away in green and anything stationary or moving slowly in blue, rain filters are switched off. To protect them all other portable electronic items were in the cooker acting as a Faraday Cage. As the storm got closer this one went in as well.
With the inshore route around the Bill unavailable due to the timing of the tides and darkness, you have to stay well clear of the race and over-falls before skirting the dangerous Shambles bank that extend 5 miles east of the Bill.
With very light winds, a choppy sea and, close to springs, well over two knots of adverse tide even clear of the Bill, I spent a lot of time going backwards (over 4 miles in one go) or at best holding my ground. With shortness of fuel (see below) the dash for the harbour under engine round the Shambles bank needed to be timed right to take advantage of strong helpful tides there, I hit that about right with 4 - 4.5 knots largely helping as I went south of them.

A bad day with Fuel

With the fuel tank due to be replaced I did not want to take a lot of fuel, the tank would need to be emptied and I would need cans to store the fuel and may calculations showed sufficient for 120 miles. In my previous post I foolishly wrote:

At 13:10 I updated the fuel log (in Excel) that showed, to be on the safe side, I needed to put more fuel in the tank with in a couple of hours. 10 minutes later, whilst I was having a coffee prior to transferring some fuel, the engine began to stutter, fuel starvation is always a good bet on a diesel so I quickly stopped it for investigation and sure enough a pump of the lift pump showed no fuel coming out of the bleed in the final fuel filter. So I put most of my reserve in the tank, bled the system at the filter and the engine started and ran fine without having to bleed the high pressure pump or injectors, stopping the engine quickly certainly helped there.

Checking the calculations and the high implied fuel consumption if the tank had run out, together with the fact that only few pumps were needed to bleed the system (indicating the primary filter was not empty), I now believe there was some fuel left but that the pitching of the boat prevented the fuel coming out of the tank, a bladder tank has no baffles and is not necessarily smooth and level. I have on a few occasions run the engine with low fuel levels but iirc always in calm water.

The remaining problem was that I had half the fuel that I thought and an emergency reserve is what it says. Staying up all night to sail on in light winds does not count as an emergency so it was going to be a long day.
Update: When I got back to Hamble I removed the bladder tank ready to install the new steel one, calculations showed that there should have been 10.7 litres of fuel remaining. I pumped out 47 litres so I have been carting around at least 30 litres, almost 30Kg, of unusable fuel and I "ran out" because normally usable fuel could not consistently get to the tanks outlet in the choppy sea and with the boat rolling.

A bad day with Halyards. 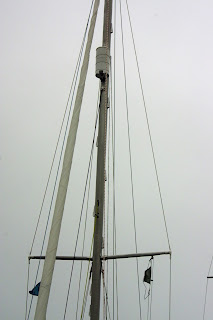 Once upon a time (in 2018) raising the mainsail whilst coming out of Plymouth Sound the boat went hard into a wave, the main Halyard swung forward of the mast above the spreaders and wrapped itself around the radar reflector (the can shaped thing on the front of the mast in the picture). Getting it untangled took some time, a boat hook and going a few steps up the mast. Since then I have been carful to keep it taught as much as possible and it has not happened again.

When I was hoisting sail after motoring out of Salcombe the boat hit a wave left over from strong winds the previous evening and in the few seconds it took to get from releasing the halyard at the mast back to the cockpit to pull it up the halyard went forward and was trapped.

Fortunately it went to port over the spinnaker halyard and I was able to use that to flip the main halyard forward and off of the reflector. a coupe of minutes and it was sorted.

Much later when I was hoisting the mainsail for the third time that day (motoring into a head sea with no wind made the sail slam around so I had taken it down), it happened again but this time it had gone to starboard and there was no halyard to pull it away and after a considerable time trying to free it I gave up and decided to use the topping lift as a halyard. This is a bit of a pain when reefing as there is nothing to support the boom but no big deal and I had deliberately used a rope (8mm with a Dynema core) strong enough for the job but thin enough not to cause problems in normal use.

And blow me, it happened again! 3 times in one day and only one previous occurrence in c 8,500 miles!

Again I could not use another halyard to free it and I was not going to go up the mast in the still choppy sea. I worked out that if I could throw the heaving line over the spreader I could haul the halyard or topping lift forward, free it from the radar reflector, then pull it back. That sounds easier than it was, I don't have a strong throwing arm but the main problem was the small target swinging from side to side as the boat wallowed, using the engine would have reduced the roll but I could not risk the heaving lie going over the side and getting wrapped around the prop.

It took an hour to get the topping lift back, unfortunately the main halyard had followed a different path so could not be pulled through at the same time. I got it one way but could not get it back so exhausted, with my arthritis hurting and my temper getting frayed I gave up and set sail with the topping lift as a halyard. Later when I had recovered, the sea had calmed a bit and the wind was strong enough to stabilise to boat under sail I managed to finish the job.

This winter I'll look at running a wire from the radar reflector to the mast to stop anything getting in.

A bad day with fog.

When I was SE of Portland Bill the visibility began to deteriorate to the point that I could not see a large well lit cruise liner (c 300 metres long) until it was less than a mile away despite having it on AIS and radar. As I passed the East Shambles Buoy the visibility was not much above a quarter of a mile and getting worse. A seconded cruise liner coming from Portland went by less than half a mile and not clearly visible.
Although I was confident in having fuel for the rest of the trip I turned the engine off and sailed under headsail only in a light westerly wind at about 3 knots and in the quite listened out for small boats that might not show up on radar or have AIS. The pier head lights on the eastern entrance that have a nominal range of 5 miles showed up dimly at a quarter of a mile.
Navigating by radar and GPS I made the north entrance following an old track (not really an issue with a well charted area like Portland harbour but  following a track you know to be good is generally better than relying on the cartography), again the lights showed at about a quarter of a mile but I never saw the pier heads themselves even though the entrance is quite narrow.
The lights on buoys marking the channel through the harbour showed up at 400 feet by GPS & radar (the modern "broadband" doppler radar with pulse compression works very close in, to about 8 metres, unlike old pulsed radar) and I saw nothing else except a single anchor light before I anchored. The radar was a big help showing a number of buoys and boats.
I anchored shortly before midnight, tided up the deck, filled in the log and pored a glass of wine, by which time, at most 15 minutes, the fog had lifted and I could see 1/2 a mile. By the time I was ready for a second glass (not long!) I could see right across the harbour.
Next morning I moved into the marina to take on fuel, get a shower, a meal at the café and some supplies from the supermarket not far away.

79 miles in 20 hours.
Click here for the last leg and summary of the trip.
Posted by John Lashbrook at 7:20 PM