Rules for connecting batteries in parallel and in series.

Batteries are wired in parallel to increase capacity at the same voltage and in series to provide a higher voltage than an individual battery produces, on a large boat that might be to support a 24 Volt system, on most others it would be to provide the "standard" 12 volts from 6 volt batteries usually those intended for other purposes typically golf carts and other motive power applications.

Most rules apply to both configurations:

Interconnects should be of the same length to the load, of suitable current carrying capacity preferably several times the expected maximum load and as short as practical. If this is not physically possible consideration should be given, despite the increased cost, to having the batteries in two banks, independently switched and managed as I have done on Sancerre where I have some batteries under the navigators seat and some under a bunk and which were originally of different capacities.

There are some additional rules for connecting batteries in parallel. 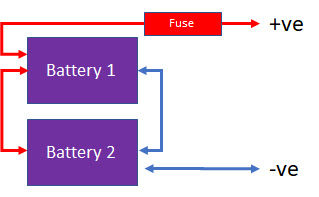 The positive and negative feeds are taken from the opposite ends of the bank as shown above (most pictures on the internet don't show this, but it is the best way to do it!). Normally the number of batteries (or strings) in parallel should be limited to 2 or 3 but see the manufacturers recommendations as some suggest more are OK depending on type.
For ultimate security a fuse can be incorporated on either the +ve or -ve interconnect so that an internal short in one battery will not be fed by the others in the bank. This is one of the few circumstances where it might be appropriate to mount the (ANL) fuse directly on the battery but there must be no possibility of movement, vibration or tension on the inter-connect stressing the fuse and use a flexible type cable with many thin strands of conductor that rather cable with only a few. Putting the fuse on the -ve interconnect should limit the potential for accidental shorting, on the positive side significant insulation would be required.
If connecting batteries in parallel and in series, each "String" of serial batteries should follow the rules above to make up the required voltage, so 2 x 6V batteries for 12V, 4 x 6V or 2 x 12V for 24V, to form one string, then each String is then treated as a Battery in the diagram above.