I woke at 03:00 to find the wind was west of North, a big improvement on NE so although the tide would be foul approaching Dover I moved out with the possibility of sailing to around the S Foreland rather than having to motor much of the way, Like the last, this cunning plan failed as the wind soon came round and became very variable in direction and from 6 or 7 knots up to 18 knots and later quite a bit more at times. 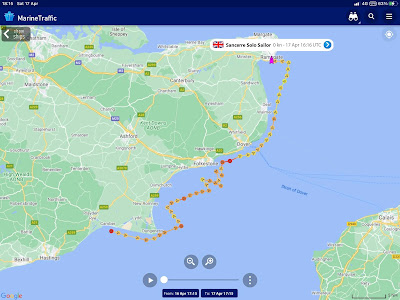 Once the tide turned, about half way from Dungeness to Dover, I was beating against the tide and with leeway I was being pushed 20 degrees off of the course steered so it was very slow going. A few miles short of Dover I moved very close to shore to get slack water from the early turn of the tide that is expected there. The wind suddenly increased from 10 to 20+ knots and veered 20+ degrees instantly, that was too much for the autopilot and I was flat aback.

After sorting that out I was heading to shore and about half a mile off with the wind well over 20 knots so I tried to reef the headsail, but the roller reefing would not work, the problem was relatively easy to fix but not in such bad weather, in a rough sea and when heading towards the shore so the sail came down and on went the engine.

With the sail down removing the control lines riding turn (caused by the  sail coming out too quickly when I started the day - a gust caught it and snatched the control line from my hand but in the dark I did not notice the riding turn) took about a minute but raising the sail again in those conditions which persisted all the way to Ramsgate (at F5) would have been hazardous and  in practical terms I would shortly need the engine to round the South Foreland and go up the Gull Stream directly into wind so the mainsail came down as well and I motored on to Ramsgate. The last few miles were in very rough conditions due to 20 knots of wind against 2 knots of tide in shallow water.

Surprisingly the facilities are open so I'll stay over Sunday and leave for the North on Monday morning, looking at the forecasts that could be another frustrating day and there maybe some strong onshore winds coming on Thursday so I may get stuck in Lowestoft, or perhaps at anchor behind Spurn Point. we shall see.

55.1 nautical miles over the ground (far less if not beating and less still through the water going direct) in 14 hours. Winds 5 - 20+ knots.

Posted by John Lashbrook at 5:09 PM

Email ThisBlogThis!Share to TwitterShare to FacebookShare to Pinterest
Labels: 2021 Round GB, Ramsgate