I left Portland at 05:45, half an hour late as the alarm did not go off, perhaps fooled by the change to BST, I motored past the eastern entrance as there was a merchant ship heading for it and I wanted to be well clear, I was then able to sail in 12 - 20 knots of wind and rather more for about an hour, all the way to Plymouth, although there was rather less as I rounded the Bill.

Sailing down the Bill somewhat reduces the risk from lobster pots but you need the wind to be from the NE through to SE to make this practical as winds from the west are disturbed or blocked by Portland.

It was close to a dead run from the Bill with the wind about 10 degrees on the starboard quarter and then from about 11:00 with it from 10 - 20 degrees off to port. The sea was unfortunately well off the port quarter so the boat was rolling a lot with the occasional broach, especially in the middle of Lyme Bay when the sea was moderately high for several hours as the tide turned to be against the wind.

Making 5 and often more than 6 knots it was a reasonably quick passage, I could have gone a bit quicker but frequently reefed the headsail to better control the boat in the steep, breaking sea.

The timing was quite good as the foul flooding tide eased as I passed Start Point which saved me some of the grief you often get from rough seas off of Salcombe and I had a fair tide past bolt tail to Plymouth.

Entering Plymouth harbour was rather entertaining, naturally the wind freshened and I was reaching quickly whilst trying to sort out the lights complicated by a large RFA and HMS Somerset at anchor changing the pattern of background lights and a warship departing without AIS getting between me and a couple of key marks.

I anchored in Jennycliff Bay just after 22:00  in 20 knots of wind which disappeared a few minutes later and I had a quite night. 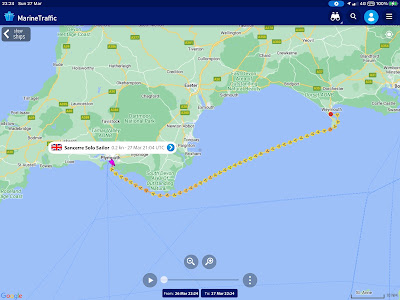 I left at 07:40 with a favourable tide but the brisk northerly died as I was weighing anchor and was light and variable until I got just past Rame Head under engine, then it was again a run under headsail all the way to St Mawes.
After the quite night the sea was smooth as I left and with winds generally at the upper end of Force 4 or a light Force 5 the sea never got to the heights I had the previous day but it was still tiring. Video of the SeaFeather working on a broad reach with a quartering sea, best viewed full screen 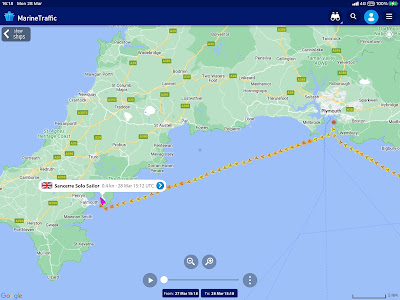 A fairly quick trip, 39 mile in less than 9 hours at an average speed of 4.7 knots over the ground.

Click here for the trip round the Lizard to Newlyn.