The forecast for later this week is not looking good so that even though there was no wind in the anchorage on Tuesday, but with the promise of some to come, I left at 07:45 to catch the tide, very light airs from the north set in as I passed St Anthony Head, so I tried to sail flying the cruising chute but essentially drifting on the tide too close to the Manacles. There was a danger of losing the favourable tide so on went the engine.

With only a knot and a half of tide, a smooth sea and no wind I cut the corner and went fairly close into the Lizard. The wind stayed very light with visibility varying from less than a mile to greater than 6 miles. A few miles out of Newlyn some wind, up to F3 filled, in from the SW before veering to the NW as it was a head wind and variable and I was less than an hour out I continued under engine getting to Newlyn at 14:45. 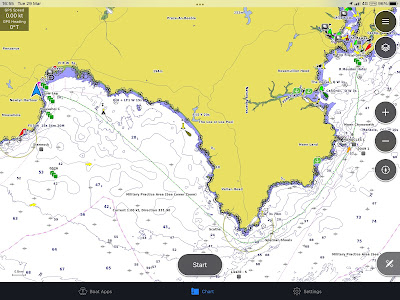 33 miles in 7 hours.
When I arrived on Tuesday, the forecast had not been good, Force 7 coming in on Thursday night. As I write this bit (Friday lunch time) it is blowing a very cold F5 gusting to around F7 and the boat is rocking quite a bit in the harbour. The models disagree on what is going to happen from Sunday on, some show reasonable winds to get to the Scilly Isles, but this wind is likely to remain very cold so it is not an attractive option. The models diverge even more for next week with some suggesting strong winds but not agreeing when they will come, others showing reasonable conditions. There is no point in trying to guess what will happen at least until tomorrow and probably not for 2 or 3 days.
Slide show of pics from Portland to Newlyn: 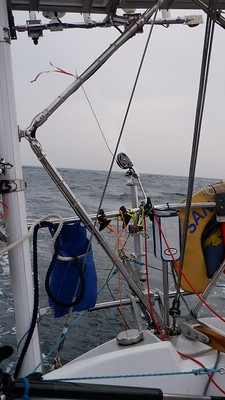 Click here for stuck in Newlyn for some time!
Posted by John Lashbrook at 12:43 PM