It is now Sunday, day 11 and I have been here 5 days and it looks like I will be here for a long time, I need a couple of days of clear weather and not much sea off of Lands End, at the moment there is no window apparent for at least a week.

Todays the wind is light but its forecast to come in from the North West - dead on the nose going to the Irish coast and almost so going to Milford Haven. Increasing to Force 6 at times tomorrow and it is a very cold wind. Depending on which model you look at there could be gusts over 40 knots on Wednesday or Thursday and another band of high winds arriving next weekend.

The weather systems are complicated and the forecasts are constantly changing, even a day or two out so I can only hope they change for the better.
In the meantime, the list of odd jobs needed on the boat is already unusually short and soon there will be nothing left that I can do here, almost an unheard of situation on a boat.

Outlook for the following 24 hours: Southwest 6 or 7, occasionally gale 8 at first, veering northwest 4 or 5, increasing 6 or 7 for a time. Moderate or rough, but very rough at first in west and slight later in lyme bay. Rain or showers. Good, occasionally poor.

Outlook for the following 24 hours: Southwesterly 6 to gale 8, veering westerly or northwesterly 4 to 6, increasing 7 or gale 8 for a time. Moderate or rough, but very rough at first in west and slight later in east. Showers. Good, occasionally moderate.

A rough sea is not normally something I will set out into, especially near Lands End. Very rough there does not bare thinking of.
There may be a window Friday/ Saturday to get to Milford but the models do not agree.

Finally I will be moving out, initially to anchor and save a days mooring fee that are now rather expensive summer rates. Then tomorrow I will head off to Milford Haven, ideally I would go on the morning tide at 02:30 but the wind is likely to be a cold northerly and it would be wind against tide going round Lands End. So, unless the forecasts change, I'll leave at lunch time when winds will either be lighter and / or hopefully favourable and the sea will have had some time to calm down. The downside will be a long night at sea.
I had been having occasional problems with the starter motor solenoid needing several pushes of the starter button to get the starter engaged so whilst weather bound, I took the opportunity to replace the engines starter motor as described here. 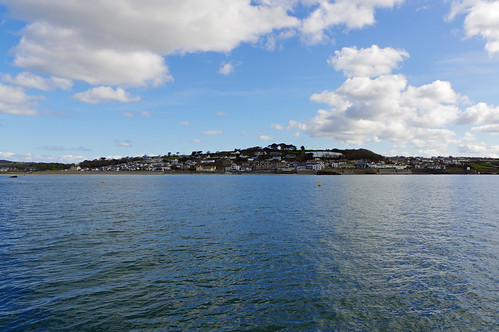 Click here for the trip to Milford Haven.
Posted by John Lashbrook at 2:35 PM