I woke up well before the alarm but decided I might as well get moving so I was underway at 04:40, in the previous 30 minutes the wind had increased from virtually nothing to 14 knots so I was sailing immediately, 30 more minutes and it was blowing 25 knots and I was beating in to it and rather uncomfortable.

As I approached the Sound of Islay the wind was down to F2 from the E, this set a bit of a pattern for the day with the wind constantly changing.

To make the tide I used the engine for about 4 miles to McArthur's Head but I was then able to sail most of the way through the Sounds 11 mile length but after tacking back and forth with 1 - 3 knots of tide behind and the wind F4 varying quickly from east to north west. The wind was also gusty due to the mountains.

A very nasty sea built up as I approached the north end of the sound so I motored out.

I was heading for Loch Tarbert, I anchored on the south side in Glenbatric Bay in 2020 but with the wind from the north the north bank was a better option or a long way up the loch through some tricky Pilotage.

Also I really wanted to see the raised beaches that line the loch but which I had been unable to check out previously due to time constrains and bad weather. These beaches were left stranded well above sea level as the land rebounded after being depressed by the ice ages.

On this occasion I had plenty of time, so the plan was to check out all of the anchorages up to and perhaps beyond Cumhann Mor the first very narrow passage.

The first anchorage I passed is quite open to swell but a useful stop off point waiting for a southbound tide through the Sound of Islay which one boat was doing. The second anchorage, Bag Glean Righ Mor, looked really nice, more of that later. It was high tide so I could take a few small liberties as I went further up, unfortunately struggling to take pictures in difficult conditions coming up the Sound I had accidently switched the camera to black and white mode, at some point I'll put those up as a slide show but it will take a while as there are a lot!

I turned round at Cumhann Mor, in the conditions and with the Antares charts and GPS going further would not be a problem but I might be leaving in the dark and at low water so decided to go back to the Bag Glean Righ Mor anchorage. 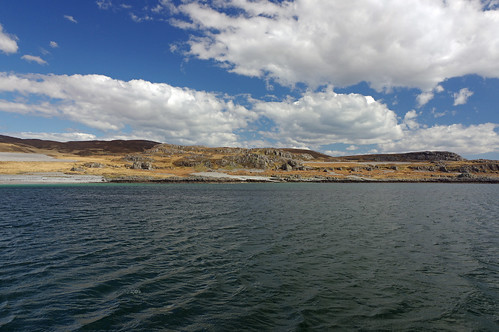 Forty miles in eight and a quarter hours.
Click here for Tinker's Hole
Posted by John Lashbrook at 4:02 PM