A trip of 3 or 4 parts. I had intended to leave about 14:00 to be at the Runnel Stone (see chart below), south of Lands End at 16:00 as the tide turned. It was however a very nice day with light winds so I thought I might as well be sailing so left at 12:00 after an early dinner.

The wind was rather variable but stabilised when I was off of Mousehole and I stood out to sea on starboard tack before tacking to make the Runnel Stone. Unfortunately the nice F3 wind died so on went the engine which stayed on for much longer than I was comfortable with, but it was necessary to maintain a reasonable speed if I was to get to Milford Haven before some strong winds that were forecast to arrive the following afternoon or evening. 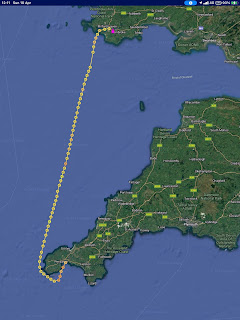 The very light winds persisted until almost midnight when the forecast south easterly set in and I was sailing from 23:45 initially at F3 but building to F4 then F5 around 05:00. The last few hours were very rough going with the wind at the top end of F5 with a few gusts of F6 but more serious was the very nasty quartering sea knocking the boat off coarse to an up wind broach before the autopilot could correct, 2 reefs in the main helped for a while but I ended up sailing for several hours with no main and a double reefed headsail and still making 5 - 6 knots. It is quite likely that this rough weather caused the failure of my wind generator which happen at this time, covered in this separate post (opens in new window).
I took a quick look at West Angle bay but decided against that as an anchorage and moved to Crow Pool just below Pembroke docks, a small pool at the bottom of the Pembroke River anchoring at 12:00, 138 Nautical miles over the ground in 24 hours. 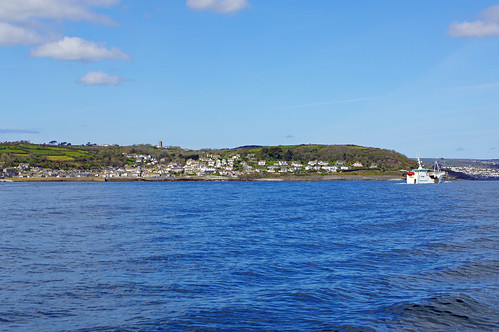 Click here Days 19 Near disaster then up the River Cleddau.
Posted by John Lashbrook at 2:05 PM